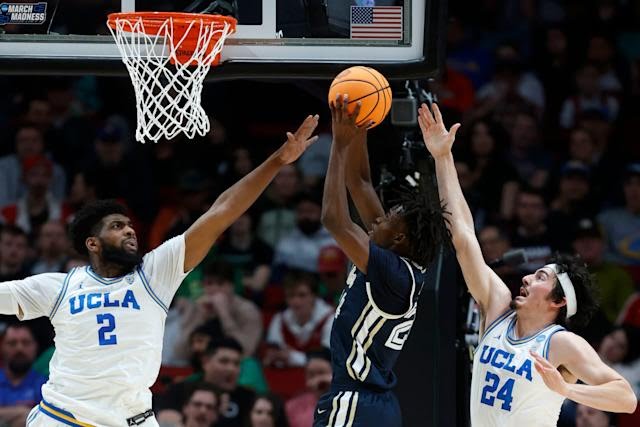 PORTLAND, OR—In the first round of March Madness on Thursday, March 17, the No. 4 seed UCLA Bruins escaped with a 57-53 win over the No. 13 Akron Zips at the Moda Center thanks to the Bruin’s point guard Tyger Campbell’s clutch shots in the final three minutes.

Last year, the Bruins were the Cinderella story reaching the Final Four, Akron seemed poised for the giant upset as the Zips lead 47-39 with 7:54 left. Xavier Castaneda led Akron with 18 points, Enrique Freeman scored 14 points asserting himself in the post.

Akron played swarming defense, their trap defense frustrating the Bruins offense. This led to seven turnovers and poor shooting from the field.

UCLA’S Tyger Campbell rescued the Bruins from the potential season ending defeat by scoring eight straight points in the closing minutes. First, it was a wide open three-pointer from the corner, followed by a 15-footer which gave the Bruins their first lead in the second half.

“My teammates kept finding me, and I was just wanting to make a play,” said Campbell.

The play of the game occurred as the shot clock was about to expire with 1:17 remaining. Campbell drained a three-pointer standing on the NCAA logo near halfcourt. UCLA finished on an 18-6 run to end the game.

Campbell scored 16 points, Jaime Jaquez added 15 points to lead the Bruins. Akron’s final chance was a layup which was blocked by Cody Riley.

Johnny Juzang hit a pair of free throws to move on to the next round although he struggled with only 9 points on the evening. Based on his history in March, Juzang will bounce back with a big game on Saturday, he will have to if the Bruins expect to reach the Sweet 16.

UCLA marches on to play St. Mary’s Gales on Saturday. St. Mary’s crushed Indiana 82-53, so the Bruins will have to make adjustments and clean up the sloppy turnovers.