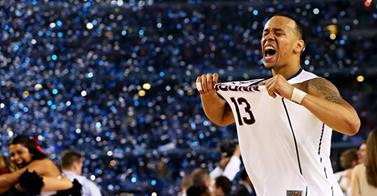 ARLINGTON-The Huskies go from being out of the tournament to being on top once again. After dealing with a one year suspension for academic related infractions, the UConn men’s basketball team made their return by holding the game from start to finish. UConn defeated the Kentucky Wildcats 60-54 to win their fourth national championship. Shabazz Napier had an unbelievable night scoring 22 points with a pair of massive three-pointers to be named MVP of the 2014 Final Four. Napier is the fourth player in NCAA history to tally 125 points, 25 rebounds and 25 assists joining Derrick Rose and Larry Bird.

With both seeds being above seven or higher, a fight for the title occurred in the Lone Star State. Odds were in favor of Kentucky making a run through the Huskies for 40 minutes, but they were sorely mistaken. At the start, UConn made a run ahead with DeAndre Daniels scoring the Huskies first point on a dunk over the Wildcats defense. After evening the game at six each, UConn went on a 6-2 run for the next four minutes as Ryan Boatright scored a pair of free throws and a layup, with Napier scoring one of his four three-pointers of the night.

Kentucky tried to make an effort to come back early before they lost grip of the game, but the guard play from the Huskies was overpowering the Wildcats on the court. They began to slowly catch up as they went on a 16-5 run with Julius Randle and the Harrison boys to bring the margin down to four to close the first half. Kentucky has gone 4-0 when trailing or tied in the tournament this year indicating that their play might be a slow start with a better ending to come in the second half.

Their fight picked up in the second where they came within a point on Aaron Harrison’s layup from Randle five minutes in. The Huskies increased their lead with Napier recording a pair of free throws before Neils Giffey made a three-point jumper to hold the margin at five.

UConn kept a three possession lead on the Wildcats and never let them gain the lead once. It was a big show of force from the team as they made odds makers shudder putting them at 100:1 to win the tournament since coming back from suspension.

The Wildcats made every attempt to close the four-point margin in the last three minutes with James Young and Randle missing attempts in the key. The Harrison boys made one last chance to shoot a pair of threes, but failed to fit the ball through the net with 14 seconds left.

As time ran out the legacy of UConn’s dominance in basketball returned since they won their first championship back in 1999. This year’s team showed the best game in any final where they were 10 for 10 at the free throw line. They became the first team since

Since the change of guard from former coach Jim Calhoun to second year Kevin Ollie, the fourth championship in the school’s history could bring more titles to the school in the future. Since they haven’t been to a title game without losing, it’s very possible for history to be good to UConn basketball.