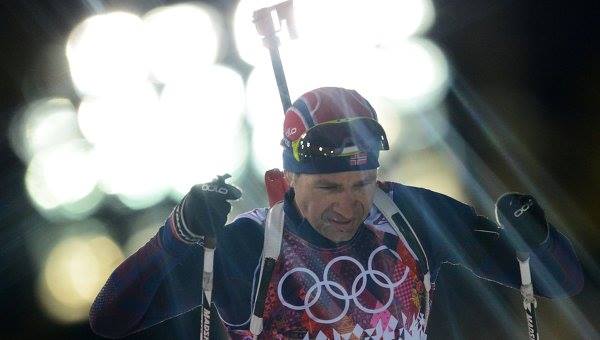 SOCHI,
RUSSIA—The Ukrainian women never before in the run to be competitive in the biathlon relay came out front and dominated the competition beating
Russia and

Norway who finished with a silver and bronze.

The Russian women have won the last two times in this event and with the home crowd on their side, they were sure for a good chance at a three peat. Olga Zaitseva was the remaining member of the defending champions who won with a 32 second margin in 2010. The Norwegian women come back for another shot at defeating the Russians while the French and Germans tried to repeat as medalist as well.

The race began with

Switzerland’s Selina Gasparin leading the pack up the hill and later came to the range trying to add a medal for the Swiss in the sport. She missed three times to lose the lead and gave
Russia the lead followed by

Ukraine.  Vita Semerenko lead the second lap with Yana Romanova behind her coming into the second round of shooting. She was first out putting the crowd into a wild cheer with Semerenko in second and Italy third.

The first exchange had
Italy out front this time, with
Russia taking over second and Ukraine third.

Norway was surprisingly 50 seconds back as their best biathletes were being saved for the final runs in the race. Zaitseva was out front going into the stadium with

Ukraine’s Juliya Dzhyma on her side looking to change up the leader board. At the fourth round of shooting, the Ukrainian came out to lead the pack into the range and went perfect opening up a nine second lead over

Russia with the Czech Republic 27 seconds behind. Czech star Gabriela Soukalova took the second position from Zaitseva gaining ground trying to cover the remaining gap before the exchange. The Ukrainians made the switch after 12 kilometers holding onto a 12 second ahead of the
Czech
Republic while Norway took third.

Things can change at the shooting range and they began to show with Valj Semerenko coming into her first leg of shooting going five for five, with Russian Ekaterina Shumilova and

Norway’s Ann Kristin Aafedt Flatland rounding out the top three. The Czechs committed errors having to make their way around the penalty track losing more unnecessary ground. It seemed like the Ukrainians couldn’t lose with their massive lead but all their time disappeared. Semerenko missed three times leaving her to reload on her extra shots which cut a massive amount of her time off the clock.

At the final exchange
Ukraine’s Olena Pidrushna took the anchor as she is the reigning champion at the world championships, with

Norway and Russian making it a race between the two countries. Tora Berger was
Norway’s anchor while

Russia relied on Olga Vilukhina. Pidrushna came to the range for the first time where she missed one shot and got away at the same time competitors arrived. Vilukhina went clean chasing

Ukraine by 17 seconds with Berger behind Vilukhina by five. For the final time on the net, Pidrushna, Vilukhina and Berger were at the range with the Ukrainian going perfect with
Russia and Norway who sat in third behind by 25 seconds.

All three women were clean to win a medal, but with

Ukraine holding a sizable lead their quest for a gold medal in any biathlon event would come true. Pidrushna finished the race full of pride in 1 hour, 10 minutes and 2.5 seconds for her country’s first gold medal in the sport and at these Olympics. The win helps the tensions that continue to rise in
Ukraine amid protests and riots in the country’s capital

Kiev. “We dedicate this victory to the whole of Ukraine,”Â said Pidrushna.