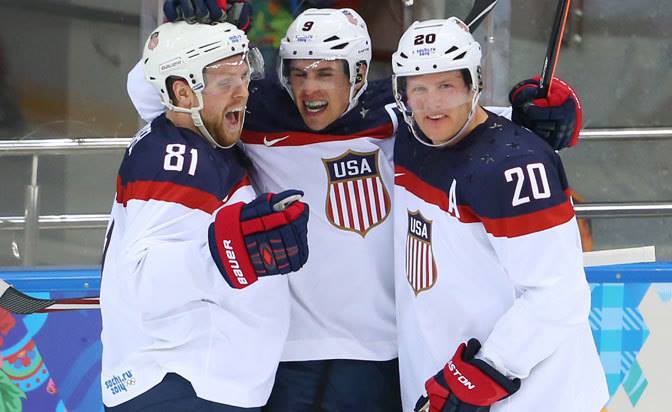 SOCHI, RUSSIA—Team USA had another dominant run against a vulnerable opponent. A three unanswered goal lead in the first period ended in a 5-2 beating of the Czech Republic for the Americans to move on to the semifinals. Five different players scored for the

United States in the third game where they scored five goals or more.

After having a dominant show of force in the preliminary three games by outscoring their opponents 15-4, their first task in the single elimination tournament came against the

Czech
Republic. Tomas Plekanec and Jaromir Jagr are the two top scorers for their team, but defeating the Americans who have allowed just three goals with Jonathan Quick in net looked to be a difficult feat.

USA got on the board in the first minutes of the first period in which Patrick Kane won the puck off the boards in the Czech zone where James van Riemsdyk got behind net minder Ondrej Pavelec to score his first goal of the tournament. Three minutes later saw the Czechs tying the game with a fight in the crease where Ales Hemsky got the credit for the goal and Ryan McDonagh’s attempt to clear the puck ricocheted off an American stick and into the back of the net.

The Americans gained their back with Dustin Brown scoring on a pass from David Backes to give the Los Angeles King his second goal of the tourney. Brown nearly went for his second near the end of the period where Ryan Callahan ran into the Czech goaltender, but somehow got a glove save on the shot.

Backes scored on the bouncy boards at the Shayba Arena where a wide angled shot gave him his third goal with 1.8 seconds left on the clock. Team
USA outshot the

Czech Republic 9-7 with nine scoring chances and 10 of the 18 faceoffs won by them.  With Quick back in the net for the third game for the

United States, the work from his defense out front helped out with six blocked shots that left them behind by a pair of goals.

On the power play in the second period, Team

USA Captain Zach Parise outplayed the Czech defense in front of the crease where his shot made its way behind Pavelec to give Parise his first. The Czech changed goaltenders after the fourth goal where Alexander Salak took over. The change in net kept the score from growing any further, but the team had a lot of ground to cover as the second period was coming to a close. The Americans continued to dominate, shooting six times in 20 minutes as they faced two power plays back to back with no change in the score.

Two minutes into the third period, Phil Kessel made a rush to the net, where Ryan Kesler made a perfect pass to Kessel to softly put the puck behind the net for his fifth, tying Austria’s Michael Grabner for the lead. The

US continued to hold on to their lead, while the Czechs tried to get anything behind Quick. With seven minutes left, Hemsky added his team’s second goal on a shot that went high on the slot for his second of the night and third of the tournament.

It would be the last goal from the Czech Republic for the night as Team USA stayed on defense with them all the way through to the final horn where Quick made 21 saves in his third straight victory, and he looks to stay on in the semifinal round with Canada on Friday. Ryan Suter made three assists on Brown, Parise and Backes’s goals as he ran his way up near the leaders. He will have another chance as the rematch of the 2010 gold medal final takes place Friday night at Bolshoi Ice Dome.