Reed, 30, was living in Russia during the summer 2019. According to reports, Reed was at a party in the park during the last week of his internship at the law firm. 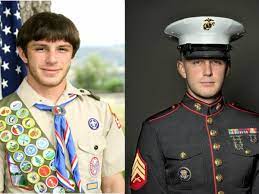 Party goers were encouraging the young man to consume large quantities of Russian vodka of which he partook. He was extremely intoxicated and running around aimlessly in the street prompting a call to the Russian Police.

Reed was in the patrol car when he reached for the officers steering wheel causing him to swerve.  When the second officer tried to stop him, Reed elbowed him. Reed was arrested and sentenced to nine years in prison for allegedly assaulting a police officer.

It is the longest sentence given in Russia in the last 20 years for an Article 318 charge, which is Violence Against Authorities.

U.S. officials claimed Reed was unjustly detained while his family maintained his innocence.  According to the Free Trevor Reed web site, he refused to plead guilty.  In his trial, Trevor reed made the following closing statement:

“I would rather stay in prison an honest man, than walk away tomorrow a liar, and a coward.”

Trevor Reed was born in Hood County, Texas just outside of Fort Worth.  He was raised and attended school in the southern California town of Tehachapi.

While serving in the U.S. Marine Corp. Reed served a tour in the Middle East and as a security guard for former President Barack Obama at Camp David.

Following an honorable discharge from the Marine Corp., Reed attended the University of North Texas for International Studies.  During this time, he was dating a girl from Russia and was studying the language. Learning a foreign language was part of the student’s degree plan.

In 2019, Reed traveled to Russia to see his girlfriend while taking Russian lessons in Moscow.