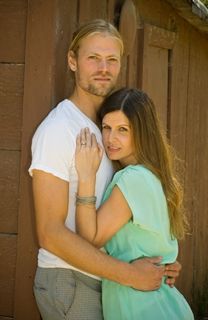 STUDIO CITY—On the afternoon of Friday, September 17, police conducted an intense investigation  in search of the suspect in the July slaying of a Valley Village resident.  The search lasted for six hours and exhausted numerous police and community resources, but ended with the suspect still at large.

On Saturday, July 24, 34-year-old Chere Osmanhodzic was killed in her home on the 11500 block of Riverside Drive in Valley Village. That day, her fiancÃ© Adam Culvey had been running an errand and returned home to confront a stranger inside the home he shared with Osmanhodzic.  After chasing the suspect and finding himself unable to catch him, Culvey returned to the residence and found it ablaze. His fiancÃ© was left for dead inside as she suffered from multiple fatal stab wounds.

The victim’s boyfriend provided a description and sketch; he described the intruder as a shorter Latino man in his mid 20s and approximately 5 feet 8 inches tall.  Police announced a $55,000 reward for information on the suspect, which would aid in his arrest.  After a couple of months of investigating, police were able to use DNA evidence to identify a suspect.  On Tuesday, September 14, the North Hollywood Police Department held a press conference to announce the identity of the suspect—Omar Armando Loera.

At the conference, Captain Justin Eisenberg described Loera as a 34-year-old man and a parolee who was granted early release from prison after serving 23 months of a 32-month sentence relating to a 2008 case of armed robbery.  Also present at the event was Councilman Paul Krekorian and the victim’s parents Mike and Gail Cameron.  Mrs. Cameron described Loera’s impact on her life stating, “He has devastated my life ”“ he has changed it completely”¦if anyone knows where he is ”“ just please ”“ please – justice needs to be served.”

On the day of the murder, Mrs. Cameron and her daughter had been spending time together making some final preparations for her wedding, which was set for September 24.  Following the ceremony, Osmanhodzic and Culvey planned on spending their honeymoon in the Caribbean before heading to Michigan (where Culvey was from) to continue the celebration with loved ones.  However, two months before the date, Osmanhodizic was murdered inside her home.

On Friday, police received a tip of a possible sighting of the suspect in the rugged hills between Ventura and Mulholland Drive.  Numerous LAPD units responded with police surveying in helicopters, officials searching on horseback and in off-road vehicles paroling the hills and trails through the Laurel to Coldwater Canyon stretch.  The search was concentrated in Fryman Canyon Park and Wilacre Park, below Mulholland Drive. After six hours of searching, police were unable to locate Leona and abandoned the mission.