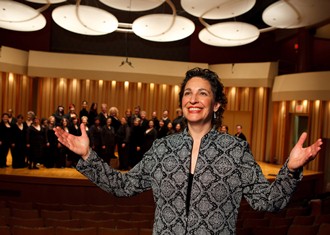 HOLLYWOOD—It was a standing-room only crowd, of both Jewish and gentile patrons, that gathered at Zipper Hall in downtown Los Angeles on Saturday, November 13, as Vox Femina launched their 2010-2011 season with VOX JUDAICA.

A celebration of Jewish traditions that began with “Shiru L’Adonal” and continued with program segments dedicated to the Sabbath, Women at the Wall (introduced by Rabbi Denise L. Eger), Generations and a moving tribute entitled Always Remember featuring selected movements from “Anne Frank: A Living Voice,” featuring the sections read by Olivia Feldman, Michael Wallenstein, Karen Glasgow and Holocaust survivor Sidonia Lax. Among the selections performed were “Mizmor Shir L’yom Hashabbat,” “Yin’yu L’ratzon,” “The 23rd Psalm,” “V’sham’ru,” “Ma Navu,” “Mayim, Mayim” and an arrangement by Vox Femina’s Artistic Director, Dr. Iris Levine, entitled “Hiney Mah Tov.” In addition to her position with Vox Femina Los Angeles, Dr. Levine is the Artistic Director for the Stephen S. Wise Master Chorus and the ACDA Western Division Repertoire and Standards Chair for Women’s Choirs. She is frequently invited to appear as a guest clinician and adjudicator for high school festivals throughout California. Vox was accompanied by both piano (Lisa Edwards) as well as string quartet for many of the pieces.

A highlight of the evening was special guest vocalist, Cantor Mark Saltzman of Congregation Kol Ami. Clearly trained as a classical singer, Saltzman creates a warm and inclusive atmosphere with vocal skill that proves he is comfortable in a variety of styles and periods.

Vox Femina Los Angeles is a women’s choral ensemble dedicated to the performance of quality choral literature with an emphasis on music by women composers. Choral singing is one of the oldest performance arts in existence, but Vox is excited to perform new works and accept new challenges for themselves and for the audience. Dr. Iris S. Levine founded Vox in 1997. In the past 13 years, Vox has established itself as one of the preeminent women’s choruses in the United States, with a demonstrated ability to perform highly eclectic repertoire, which can be heard on the ensemble’s recordings. Vox Femina Los Angeles has actively fulfilled its goals through an exciting schedule of performances, touring and educational outreach. The organization is funded through grants and private donations.
***image5***