The rally was held at the Sylvan Theater on the grounds of the Washington Monument on the corner of Independence Ave SW and 15th Street NW in Washington D.C. 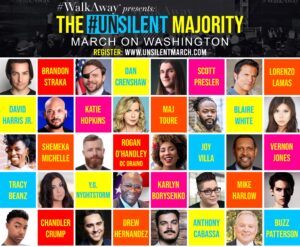 The Unsilent No More campaign encourages Trump supporters who choose to remain silent to take a stand and speak out.

Some participants marched, while others were seen rallying outside Walter Reed Military Medical Center in nearby Bethesda, Maryland, where President Trump was treated for the coronavirus.

According to their web page, “The #WalkAway Campaign is a true grassroots movement. It is a video campaign movement, dedicated to sharing the stories of people who can no longer accept the current ideology of liberalism and what the Democratic Party has become. Some left long ago. Many of us have recently been “red-pilled”. Some here have wanted to leave for some time, but have feared the consequences they might suffer from friends or family if they walk away.”

“This group is here to encourage and support those on the left to walk away from the divisive tenets by allowing people to share their stories, or watch the video testimonies and read the posts of others who have walked away.”