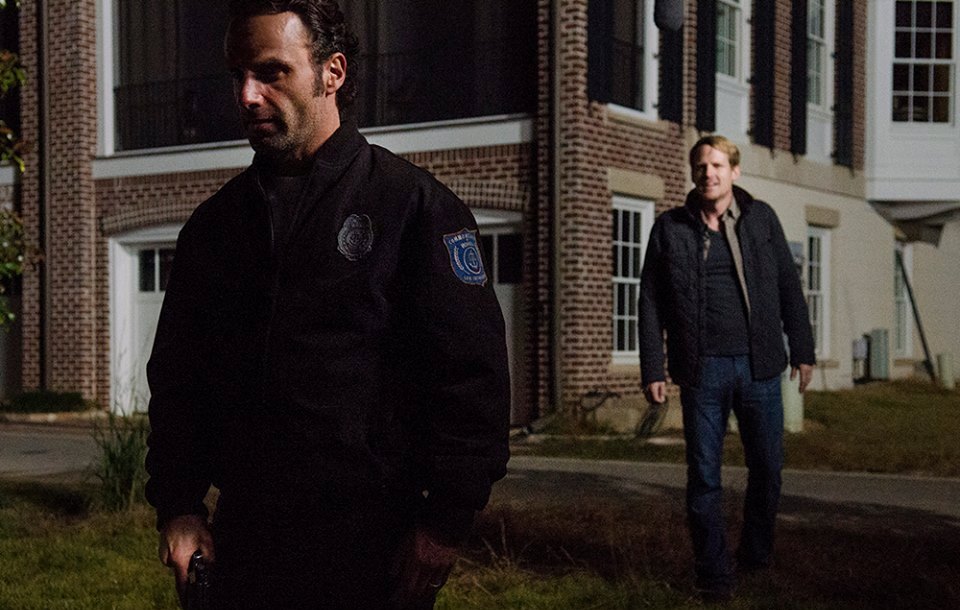 HOLLYWOOD—It was suspected that the season five finale of “The Walking Dead” would bring death, but never in a million years did we expect the deaths to hurt to this magnitude. ‘Conquer’ saw a major divide between the residents of Alexandria and Rick’s crew. Michionne took matters in her own hands to prevent Rick from looking more like an enemy than what he already appeared after going berserk on the townsfolk last week.

The episode opened with Morgan coming face-to-face with a loaded barrel by a man with a ‘W’ on his forehead, who seems to have a crew that moves from town to town taking things. He took out both of his assailants without even breaking a sweat. Kinda cruel he left the bodies in the car and honked for the walkers to come get them.

Michionne had a heart-to-heart with Rick about his actions, and Glenn, Carol and Abraham also confronted him about the impact of him being banished will have on the community. Maggie watched Father Gabriel with intense hatred from a distance, but opened up discussion with Deanna who didn’t seem to fully comprehend Rick’s actions. Sasha, the quiet one continued her job of burying the bodies of walkers, and decided to lay with them.

Daryl and Aaron continued their run, searching for new life, while Rick and Carol continued their discussion about the extra guns they had. From a distance Daryl and Aaron, spied on someone and ran into a major walker infestation, where survival almost seemed impossible for the duo; it was hundreds of the fiends surrounding them in a trapped car. It looked like escape was improbable, until Daryl decided to be bait to help Aaron escape, but got assistance from Morgan. The map he handed to Daryl was an eye-opener to say the least.

Glenn spotted Nikolas climbing over the fence and decided to follow him. It led to a shocking moment where he shot Glenn. Oh, God is another fan favorite about to leave the viewers?  Father Gabriel decided to take a walk without any weaponry to protect himself. Carol paid Pete a visit warning him that she could kill him, and she is very capable of doing it. This woman is indeed a badass, with a cunning approach to instill fear in her enemies.

Father Gabriel decided to repent for his sins by allowing a walker to take his life. Glenn and Nikolas took fighting to new heights with broken limbs and a troupe of walkers came hunting for Glenn, just as his enemy fled once again. Rick went crazy after realizing a walker had invaded the base. Sasha paid a visit to Father Gabriel asking for his assistance to help during her time of need, and he placed blame on her about her actions.

During the Alexandria meeting, Deanna decided to discuss the event that has torn the community apart, and Michionne, Carol, Maggie and Abraham shared her feelings about Rick. Rick was frantic searching for the walkers who came to attack the base. Glenn appeared to survive death and knocked out Nikolas, as a battle royale ensued between Sasha and Father Gabriel. More members of the ‘W’ camp continued to murder innocent people, with their quest to unleash walkers to destroy. Deanna shared to the tribe of Father Gabriel’s transgressions, which unnerved Jessie, and prompted Maggie to search for Rick and the priest. The community was stunned to come face-to-face with Rick as he showcased to them the walkers have invaded the camp.

Glenn was on the verge of taking out Nikolas, but he couldn’t do it. Maggie halted Sasha from making a horrible mistake. Rick informed the community that the walkers entered the community because someone left the gate open. Once again Rick took on the leadership position, and informed his community that they must work together, but a furious Pete stumbled into the compound slicing the throat of Deanna’s hubby, killing him. This prompted the noble one to kill Pete, in graphic glory.

The final moments saw Rick coming face-to-face with Daryl, Aaron and Morgan. Let’s just say the glimpse between Morgan and Rick said it all. Michionne took hold of her infamous sword, just as the message “Wolves Not Far” made it clear that they planned to continue their rampage.

Can you believe it we have an entire 6-7 months before the series returns for season six? Until October “Walking Dead” die-hards!

“Malignant” Is A Horror Mess!