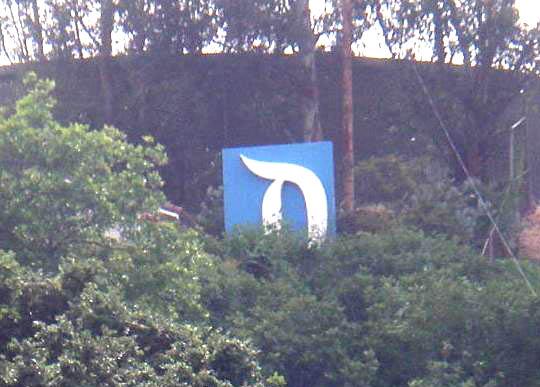 HOLLYWOOD HILLS—Zooming westward on Mulholland from Laurel Canyon to Coldwater you’ll notice a large blue and white “D” happily ensconced in the hillside adjacent to the Bowmont water tank.  My vote — “D” is for Disneyland.  It’s the right script style.  My husband swore it was “D” for the Duke Blue Devils.  I had already been on the hunt for “What’s with the water tanks?”  Now it’s “What’s with the “D”?

I had recently had a close encounter with a water tank. You know, those huge green monsters.  At the time I thought, “What an anachronism in today’s society.”  Take those dinosaurs out, they are an eyesore.  My curiosity drew me closer to the tank.  It had a sign saying Property of LADWP, with a suggestion that we be kind to it because it’s our water source. Yukk! It couldn’t be that these tanks held the water that we actually drank?  I envisioned a cistern that captures water, stores it and returns it later.  What would be the point of a cistern?  We hardly have any rainfall.  I know what kind of green slime grows inside a cistern.  You need to toss bottles of bleach in a cistern, and your tap water tastes like it.  This could not be possible in a cosmopolitan city like L.A.

So I visited my local fire station. I was inquiring as to whether the water tanks serviced fire hydrants. I secretly hoped that it was the exclusive use for the water in these behemoth tanks.  After some ho-ho-ho-ing by the fire fighters on duty, they told me that yes the tanks often feed fire hydrants, but they were not sure that fire fighting was the exclusive use of water in the tanks scattered all over the hills.  They are always unfailingly polite to my seeming ludicrous inquiries.

Determined to get to the bottom of this mystery I found a historical reference to water tanks on Mulholland and tried to reach Walter Hoye a DWP Engineer responsible for designing other water tanks.  Instead I found a very helpful DWP engineer who knew all the secrets of the how and whys of water tanks in the hills. In fact these water tanks are an integral part of our water system.  I was shocked.  They, along with the reservoirs here in the hills, are a part of our everyday — for every purpose — water supply.  Here’s the why.  Most of the city’s water supply is driven by gravity.  But once you get into the hills, gravity no longer works to move water along the city’s plumbing system.  So that’s when the water tanks and the reservoir systems come into play.  Water is actually pumped into the tanks at night.  The tanks are filled to 100 percent capacity. The city has 100 elevation zones, and pumps water into these tanks for distribution to households.  They release water via gravity to meet our needs such as “heavy use” periods, like when we get up and get ready for work. They have “fire flow” calculations to be sure that hydrants have 1500 gallons a minute.  DWP can jockey water all over the upper elevations of the city.  Without these water tanks there would be no housing in the upper reaches of the hillsides.

Anybody know what’s the deal with the “D”?