WEST HOLLYWOOD—The city of West Hollywood will promote well-being for drivers, bicyclists, and pedestrians by expanding its “Imbibe Intelligently” social responsibility and safety campaign. The city will also the launch the “Drive Mindfully” lawn and window sign campaign. In the outdoor campaign, drivers will be reminded that “we’re all in this together” and to “look out for each other on the road.”

As posted on the city of West Hollywood website, Mayor John D’Amico noted that “The City is dedicated to encouraging social responsibility and maintaining a safe community free from the harms of overconsumption and distracted driving.”

The social responsibility campaign was first launched in June 2019, as a series of colorful social media graphics with tips on safe consumption of alcohol for people enjoying the city’s many bars, restaurants, lounges, nightclubs, and adult recreational venues.

In addition, the city and the Los Angeles County Sheriff’s Department West Hollywood Station are alerting residents about an upcoming DUI checkpoint in West Hollywood, to take place on Friday, September 13.

The city’s” Imbibe Intelligently” social media marketing campaign was launched with a series of simple tips created for Pride Weekend, like those shown below. 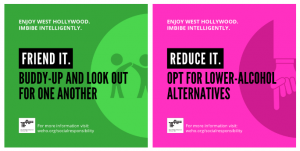 The campaign continues with the distribution of postcards and drink coasters with the tips in restaurants and nightlife establishments, reminding patrons to consume responsibly.

Closing up the effort, West Hollywood will set out lawn signs, share social media graphics, and messages that encourage drivers, bicyclists, and pedestrians to look out for one another on the roads.

“With our “Drive Mindfully” campaign, we’re getting the word out with brightly colored signs throughout the city that remind everyone ‘we’re all in this together’ and that safety must come first. When we focus on driving instead of texting, when we move over for bicyclists to have room to ride, when we remember to use our turn signals, and when we stop for people in crosswalks, we’re each doing our part to be mindful and look after one another and this helps to encourage kindness, respect, and ultimately safety in our community,” said Mayor Pro Tempore Lindsey P. Horvath.