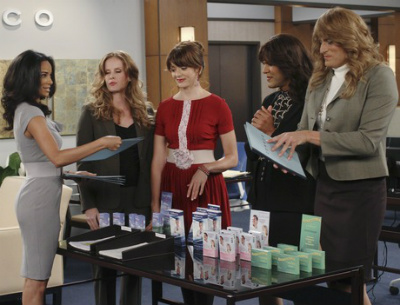 WEST HOLLYWOOD—The West Hollywood City Council is set to formally take issue on Tuesday, January 17 with an ABC sitcom about two St. Louis, Mo. men who dress up as women in order to get jobs in a bad economy they refer to as a “mancession.”

West Hollywood Mayor Pro Tempore Jeffrey Prang and Councilmember John D’Amico have proposed passing a resolution to have the city deplore “Work It,” which which premiered on January 3 as a midseason replacement for “Man Up.”The Gay & Lesbian Alliance Against Defamation (GLAAD), the L.A. Gay & Lesbian Center and the city’s Transgender Advisory Board have issued statements expressing the same sentiment.

ABC Entertainment President Paul Lee said on January 10 at the annual Television Critics Association winter press tour in Pasadena that he does not understand why the aforementioned groups are offended by what he characterized as a very silly show.

In the pilot episode, unemployed Lee Standish (Ben Koldyke) is about to pawn his wife’s wedding ring to pay a medical bill when he gets the idea to wear her clothes and lower his voice in order to land a job at a firm that is hiring. The only catch is that women are being exclusively sought out so that they can use their sex appeal to sell pharmaceuticals to male doctors. Once Lee lands the job, jokes ensue based on him hiding his genitalia, his size compared to coworkers and worrying about being seen eating large portions of food at lunch.

The L.A. Gay & Lesbian Center took issue with a promotional ad meant to be funny showing Lee and his friend Angel (Amaury Nolasco Garrido), who later joins him in dressing like a woman for work, standing at a urinal.

“Sadly, it’s very common for people to promote fear of sharing the bathroom with transgender people as a means to further their prejudice. We’re frequently portrayed as sexual predators using the bathroom to make sexual advances,” the center said in a statement.

The proposed city council resolution states, “While the characters on the show are not actually transgender, they are put in similar situations as those who are, dealing with workplace discrimination and offensive comments … that contribute to an unemployment rate among transgender people that is double what it is for the general public.”

Twenty-six percent of 6,450 transgender Americans reported being fired for openly being who they are, according to a 2009 report by the National Center for Transgender Equality and the National Gay & Lesbian Task Force. Ninety-seven percent said they underwent harassment or abuse at work including invasion of privacy, verbal abuse, physical or sexual assault. The report states that these actions have contributed to 42 percent of participants making less than $20,000 a year.