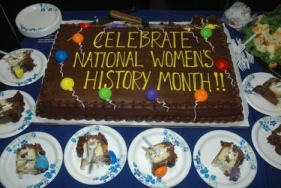 Between the months of March and April, the city will be hosting a range of different events “designed to educate, inspire and connect women” including a conference titled “Unlimited Opportunities—Knowledge.Power.Community,” which will encourage women to be successful leaders in not only their private lives as mothers and wives, but in business and the community as well. The conference is scheduled for April 8 and April 9.

An emPower networking event and breakfast is scheduled at the House of Blues on Sunset Boulevard on March 10. In an effort to raise awareness of the impact HIV/AIDS has on women and girls, those who attend are encouraged to wear their favorite red pumps (or any other red shoe) to join the Red Pump Project. According to womenshealth.gov, HIV/AIDS affects nearly 280,000 women in the United States with the numbers growing. Research shows that when compared to men, women face more challenges than their male counterparts due to a gap in access and care.

The Women’s Leadership Conference will also include a screening of “Fair Game” based on the book written by Valerie Plame, “Fair Game: My Life as a Spy, My Betrayal by the White House.” Plame, a former undercover operative for the CIA, will attend the conference. The screening will take place on April 8 at the Pacific Design Center in West Hollywood.

Additional information regarding these events can be found at weho.org.