HOLLYWOOD—Authorities have nabbed the suspect known as the “Western Bandit”, who was responsible for a series of violent crimes including robbery and murder for more than four years. Officials from the Los Angeles Police Department’s Robbery-Homicide Division (RHD) arrested Patrick Watkins, 51, on Thursday, October 29.

The LAPD Swat team personnel served a search warrant at Watkins residence and he was taken into custody without incident on an arrest warrant for the murder of Nathan “Cassidy” Vickers, 32. Vickers was a transgendered woman who was fatally shot by Watkins near Lexington Avenue and Gower Street. She was pronounced dead on the scene by officials from the Los Angeles Fire Department.

Watkins began his crime spree in November 2011, with the last known incident taking place in December 2014. He was responsible for over 23 separate incidents, including the murder of Nathan Vickers on November 7, 2011 and the murder of Larise Smith on December 8, 2014. In six of the crimes, the victims suffered gunshot wounds.

In some of the incidents, the suspect utilized a bicycle to commit his crimes and operated between the hours of 9:30 p.m. and 7:00 a.m. He approached most of his victims near their vehicles and on the streets demanding cash or opening fire on the occupants.

According to the LAPD blog, detectives gathered thousands of clues and forensic evidence from crime scenes and witness statements that connected Watkins to the crimes. The Los Angeles County District Attorney’s Office charged Watkins with 53 felony counts during his crime spree on Monday, November 2. He was charged with 2 counts of murder and 26 counts of attempted murder, 13 counts of assault with a firearm, 5 counts of shooting an occupied motor vehicle, 4 counts of second-degree robbery and felon in possession of a firearm.

He was charged with the special circumstance murders of Vickers and Smith, which makes him eligible for the death penalty.

Watkins is currently being held on a “No Bail” murder warrant. Los Angeles Mayor Eric Garcetti and LAPD Police Chief Charlie Beck held a conference announcing the news to the public. “Today, after 5 years, 2 murders, 8 shootings and 23 robberies and countless Los Angelinos being terrified, the man known as the ‘Western Bandit’ is in custody,” said Mayor Garcetti. 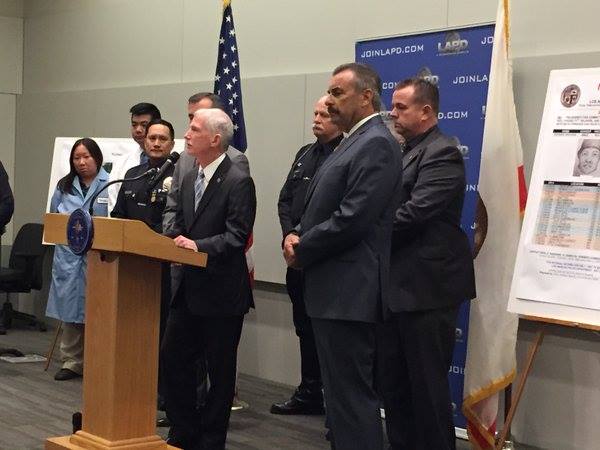 “A sense of relief is a direct result…of the work of the LAPD combining intelligence and technology,” added Mayor Garcetti. “We are pleased today he is in custody and he will be brought to justice,” said Mayor Garcetti.

“He was arrested for robbery in the 1990s, did a stint in prison, and returned to the streets of Los Angeles committing crimes,” said LAPD Chief Charlie Beck during the press conference. He noted the same handgun was used in all of the incidents which authorities recovered.

Anyone wishing to remain anonymous should call Crime Stoppers at 1-800-222-TIPS (800-222-8477). Tipsters may also contact Crime Stoppers by texting to phone number 274637 (C-R-I-M-E-S on most keypads) with a cell phone. All text messages should begin with the letters “LAPD.” Tipsters may also go to LAPDOnline.org, click on “webtips” and follow the prompts.