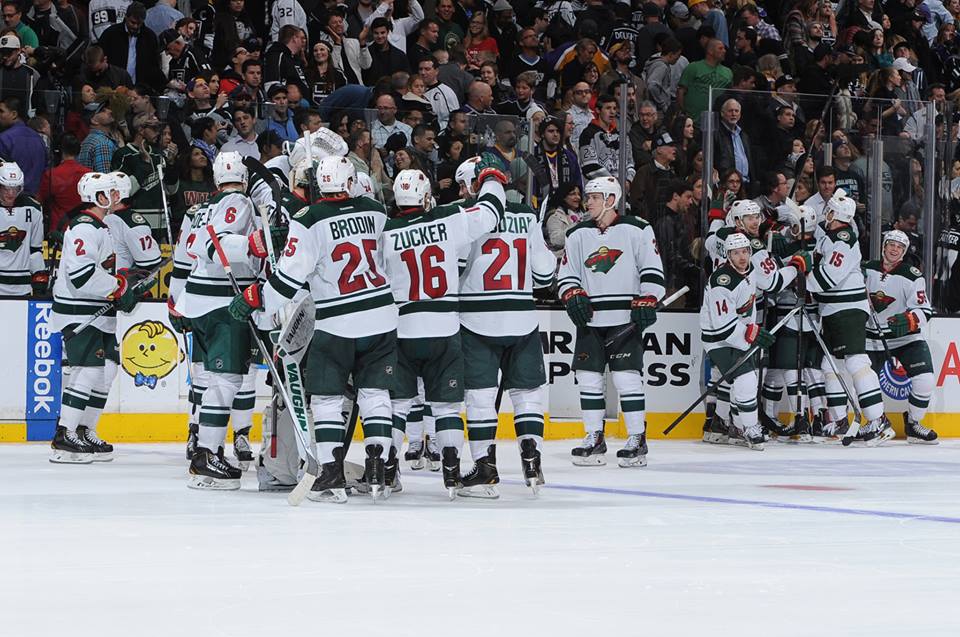 LOS ANGELES— Minnesota not only brought the negative degree temperatures with them to Southern California, but a strong block on the ice. The Kings thought it would be an easy win over Minnesota, but the result fared negatively with Nino Niederreiter becoming the game’s savior. He scored the lone goal in the fourth round of a shootout to beat the Kings 2-1 at the Staples Center Tuesday.

With Minnesota’s recent winning streak and the frigid temperatures back at home, a two-game winning streak is helping their chances of making a spot in the Central Division leader board. While taking six shots on goal, the Wild held their ground with blocked shots and the assistance of second-year goaltender Darcy Kuemper. In his second game this season, the backup netminder made a strong statement, holding Los Angeles to 17 shots.

The second period took a mirrored look to the first, with the Kings again exploding with 13 shots on net and their first chance on the power play. The Wild’s penalty killing and overall show of strength on their end proved more than the Kings had hoped for. With his team taking every attempt to break down the Minnesota defense, Kings goalie Jonathan Quick saw a total of nine shots through 40 minutes of play, indicating a tough match against a team coming from the coldest part of the nation.

The Kings’ last chance to come alive arrived with the third period and Jarret Stoll taking point. His shot, just 50 seconds into the period, put the lead in LA’s favor. Jeff Carter and Dwight King were rushing the puck in theMinnesota end, setting up Stoll on the center glove side of Kuemper for his sixth of the season.

It didn’t take long for the Wild to respond with their own luck with Jason Pominville sliding a shot that Niederreiter got in front of to score his ninth. For the remaining minutes, the game went into the hands of the goaltenders with both tightening fast, unwilling to lose the lead. Los Angeles outshot the Wild 7-6, but another five minutes were required for a winner.

Five shots combined were still not enough to give either team the win, but with a point going to both, the second would be awarded in the shootout. It was the first time Kuemper had ever experienced overtime in his ninth game in the NHL. The 23-year-old held off shots from Carter, Anze Kopitar, Mike Richards and Justin Williams for the win. The game went into the hands of Niederreiter who skated up towards Quick, shooting a centering shot that caught Quick off by a hair to seal the game for the Wild.

Though Quick saw just 16 shots on the night for his fifth loss, he had to give a tap of the stick to his adversary at the opposite end as he put on a tremendous performance in the net. Kuemper picked up his first victory making 39 saves and seeing more minutes than in any game in his career. While the Wild moves towards warmer climates, the Kings set up for a match against the Boston Bruins who look to re-group from troubling times inOrange County.