The woman has been identified as Holly Suzanne Courtier, 38, who is 5 feet and 3 inches tall and weighs 100 pounds. According to the officials, Courtier has brown hair and blue eyes. She was last seen on October 6 on a shuttle bus into the Zion National Park. 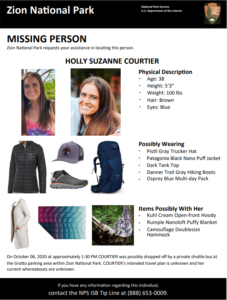 “She may possibly be wearing the following items: a Pistil Gray Trucker Hat, a Patagonia Black Nano Puff Jacket, a Dark Tank Top, a Danner Trail Gray Hiking Boots, and an Osprey Blue Multi-Day Pack,” said the Zion National Park in a statement.

It was reported that Courtier possibly has a Kuhl Cream open-front hoody, a Rumpl Nanoloft Puffy blanket and a camouflage double size hammock with her.

Authorities are seeking help from the public to locate Courtier. Anyone with information related to the case should contact the NPS ISB Tip Line at (888) 653-0009.