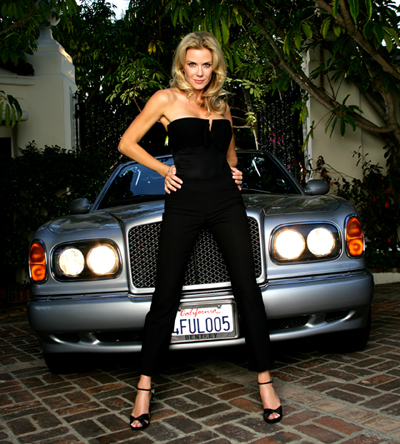 HOLLYWOOD —What is it about women who play roles over the edge that make television and movies so exciting? This week three women came to mind when I was asked by a casting director what three actresses in Hollywood embrace and exhibit the power of Greta Garbo, the strength of Barbara Stanwyck and the sensuality of Elizabeth Taylor. There were any number of stars I could name, but the three who always come to mind whenever I think of power, strength and sensuality are Tanna Frederick, Katherine Kelly Lang and Eileen Davidson.

Each actress has their own quality that is simple and elegant on-screen. Tanna Frederick’s amazing performance in “Irene in Time” was dead on and the film, which is produced by Rainbow Films, made lots of Oscar buzz this year. Of course we know now that “The Hurt Locker” would become this year’s Best Picture; though fans of Henry Jaglom’s fine work realized that “Irene” was overlooked unfairly.

Frederick knows best how to enchant an audience, make them love her, then want to come back for more. That’s an attribute the red-haired beauty knows how to convey to her audience and she plays it best when it’s over the top and full of gusto. The award-winning actress has the best body in Hollywood and this week she’ll be stretching those well-toned muscles as she chases her next dream —the L.A. Marathon. She’s running for charity and when fans get a look at her more mature and more astonishing performance in this summer’s “Queen of the Lot,” it will leave no question why she’s considered Hollywood’s sexiest and one of its most bankable stars.

Katherine Kelly Lang celebrated 23 years as Brooke Logan on CBS’s “The Bold and the Beautiful” this week. Lang who just went for a dunk in the CBS koi pond with daytime stunner Hunter Tylo still has what it takes to be soap’s sexiest woman in the world. Katherine has a natural beauty, a voice almost like a nightingale and beautiful blond hair that makes every man in Los Angeles both on “B&B” and in the actual city dream about marrying a beauty like Lang. Whether it’s sparring with multi-Emmy winner Susan Flannery or seducing Ronn Moss’s character Ridge, Katherine Kelly Lang can be counted on for an amazing performance and the most dreamy voice and eyes daytime TV has seen ever. Thanks to Bradley Bell who gives Lang the best storylines.

Eileen Davidson does it all —married to the man of her dreams, a best selling author and carries her weight on the number one daytime drama for almost two decades, CBS’s “The Young and the Restless.” Eileen plays Ashley Abbott, a woman who right now is over the edge of sanity. Though Davidson is probably the most solid and strong woman I’ve ever met. Eileen has often said she enjoys what her head writer Maria Arena Bell has been giving her to play. Play it she does! The exceptionally gorgeous star simply dazzles the senses when you watch Ashley twist and turn in every storyline. Currently Ashley’s realizing that she did not give birth to the baby she has in her arms. She suffered a hysterical pregnancy and her stepson, Adam, stole Sharon’s baby and gave it to Ashley as her own.

Tanna Frederick, Katherine Kelly Lang and Eileen Davidson are women who play roles that often send them to the edge and they play it with an ease and a natural genuineness that comes very rarely in Hollywood.

Tanna Frederick’s “Irene in Time” is still playing in select theaters and is available on DVD, Katherine Kelly Lang as Brooke Logan on “The Bold and the Beautiful” can be seen on CBS daytime and the number one rated in the U.S. “The Young and the Restless” which features Eileen Davidson is also a CBS daytime drama.