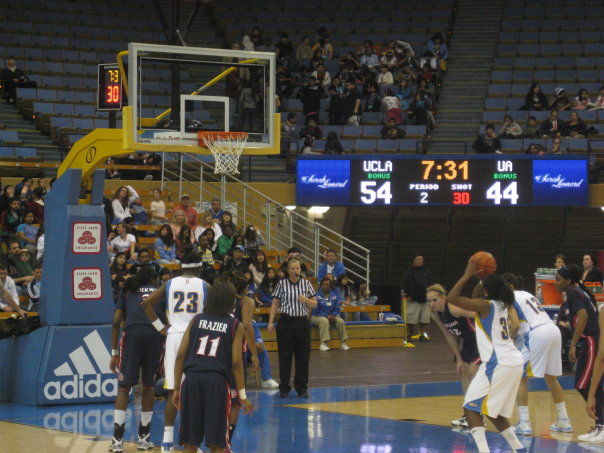 WESTWOOD—There has been a changing of the guard when it comes to UCLA basketball. For years the women’s basketball team has lived in the looming shadow of the men’s team, who are the face of UCLA sports. Legendary coach John Wooden made UCLA a basketball school back in the ”˜60s with his unparalleled success winning 10 national championship games and posting an NCAA record of 88 wins in a row. The women have never had anywhere close to the same production as men’s basketball, but this year the 23rd ranked women’s team is already on its way to the NCAA tournament, while the men need a miracle to happen in the Pac-10 Tournament for them to make the Big Dance.

The last time the women’s team reached the NCAA tournament was 2006 where it fell in the second round to Purdue. Their best season to date has been the 1998-99 season where former head coach Kathy Oliver and former star point guard Maylana Martin lead the Bruins to a school record  26 wins and an a Elite Eight finish in the tournament. This year the Bruins hope to take things a step further and make another deep run into the tournament. With 22 wins under their belt already, they could tie the record with a win in the first game of the NCAA Tournament if they are somehow able to knock off Stanford in the Pac-10 tournament.

Even though the women’s team has not shared the same success as the men, they have always been able to perform on a consistent level and made the tournament nine times coming into this season. Former head coach Kathy Oliver was great at getting elite talent to play for the Bruins and had many memorable seasons, but was never able to contend for a National Championship outside of the 1998-99 season. The biggest reason for the recent turnaround for the women’s team can be attributed to the amazing coaching job done by Nikki Caldwell. After taking over for Kathy Oliver two years ago, Caldwell has brought her winning mentality she learned while playing for and coaching under the legendary coach Pat Summit at Tennessee. As a player she was able to win a National Championship and is trying to do the same as a head coach. In two short years she has brought the Bruins back to the top of the Pac-10 and has amassed a record of 41 wins and to just 19 losses.

This year Nikki Caldwell was named Coach of the Year for the Pac-10 for leading the Bruins to a 15-3 record in conference play. Caldwell was able to bring in players like Markel Walker and Jasmine Dixon to play along veteran players like Doreena Campbell—who was named to the All Pac-10 Team along with Walker and Dixon—so the team could have a great blend of new talent to go along with experience and leadership.

Not much is known about UCLA women’s basketball outside the campus. The stands are nowhere close to being filled during games, there are no students camping out by Pauley Pavilion hoping to get a ticket, and ESPN’s College Gameday has not shown up to highlight any of their match-ups. Despite all this, with Nikki Caldwell at the helm and her ability to get the best out her players, some of that attention will definitely be in store for the women’s program in the near future.