UNITED STATES—On Tuesday, November 17, the Secretary of the Army directed Arlington National Cemetery, to host the annual national Wreaths Across America ceremony to honor  fallen heroes. This news comes a day after the event was canceled due to concerns over the possible spread of COVID-19.

I have reversed the ridiculous decision to cancel Wreaths Across America at Arlington National Cemetery. It will now go on!

President Trump and First Lady Melania have participated in the wreath-laying ceremony every year since 2017. Wreaths Across America is an outdoor event.

Melissa Tate from the #Stop the Steal campaign tweeted, “Demonic Dems trying to cancel Christmas and Thanksgiving. Both holidays give honor and Thanksgiving to God. But they will never cancel BLM[Black Lives Matter] and Antifa riots. Why?” 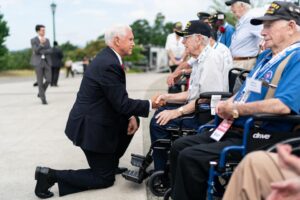 “On Veterans Day, we gather to pay a debt of gratitude to the generations of Americans who’ve answered the call to serve in the Armed Forces of the United States. On behalf of a grateful Nation, Thank You for your Service and God bless our Veterans and their Families,” Pence stated.

This year, President Trump announced  he was calling more troops home from Afghanistan. He indicated in his speech that he hoped to have the soldiers home by May 2021.