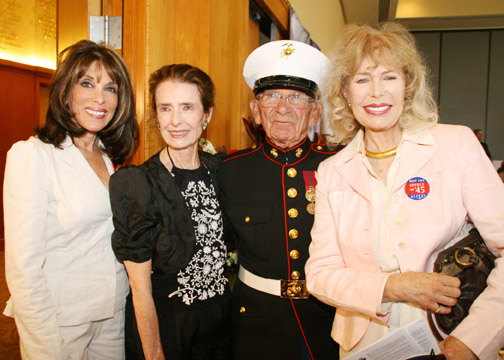 HOLLYWOOD—More than 50 World War II veterans and their wives began their Fourth of July weekend with a special reception held in their honor at the Dorothy Chandler Pavilion in Los Angeles last Saturday, July 3. As guests of the late Edith Shain, the “Times Square Nurse” who passed away on June 20 at the age of 91, the veterans enjoyed a matinee performance of “South Pacific.”

The group was made up of veterans from all the military service branches who served in the Pacific and European theatres, including survivors of the battle of the Bulge, Iwo Jima, Okinawa and the Bataan Death March.

Standing in for Ms. Shain to host the pre-performance reception were television stars Loni Anderson, Loretta Swit and Kate Linder. Film legend Margaret O’Brien shared her memories of performing at the Hollywood Canteen during WWII. Shain was the spokesperson for Keep the Spirit of ”˜45, a national grassroots campaign to establish an annual day of remembrance to honor the Greatest Generation. She had invited the veterans to join her for a performance of “South Pacific.”

Congressman Adam Schiff, (CA 29th District) announced during the reception that a bill is now being introduced in Congress this month that will officially designate August 14, as “National Spirit of ”˜45 Day.” Similar legislation was passed last month by the California State Assembly and Los Angeles will be joining New York and several other cities that are organizing special events to commemorate the 65th anniversary of the end of WWII.

“It is so heartening to know that there will be a national day each year for people to stop and remember the achievements of the WWII generation,” said Bea Cohen, age 100, who served as a WAC during the war. “Perhaps our example of service will help inspire our country again so we can deal with the big problems we’re facing.”

Cohen and the other attendees will be special guests at the Spirit of ”˜45 event that will take place at the West Los Angeles VA campus on August 14.

KEEP THE SPIRIT OF ”˜45 ALIVE! is a non-profit, nonpartisan grassroots campaign commemorating the 65th anniversary of the end of World War II. We are working to bring communities across America together to preserve and promote the legacy of the WWII generation by: Urging elected officials to support the observance of a permanent national “Spirit of ”˜45 Day” on the second Sunday of every August Organizing local activities on Saturday, August 14, 2010 to commemorate the 65th anniversary of the end of the War.

Collecting personal stories of the day the War ended, as a reminder of how America came together as a community. We invite you to join the campaign, and to help America KEEP THE SPIRIT OF ”˜45 ALIVE!

For more information on Keep the Spirit of 45 Alive go to www.Spiritof45.org.