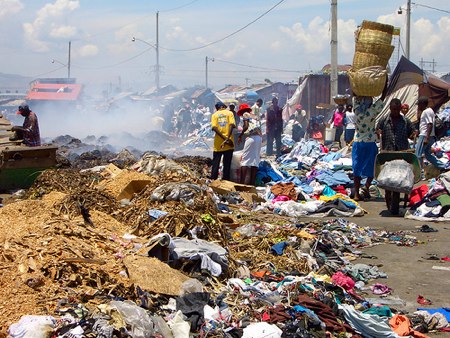 The world has certainly reacted as quickly as humanly possible with relief efforts. The media has displayed images of young as well as old suffering from the aftermath of the earthquake, bringing even the heartless misanthrope to tears. Haiti is economically challenged already; the earthquake has depleted whatever limited resources it had to begin with.

The exigency of the situation is crucial to survival. This catastrophe has been thus far the biggest relief effort ever recorded in history, with millions of dollars being pledged from all over the world. Interestingly enough, a group of geologists from the U.S. had apparently predicted and reported their initial findings at the 18th Caribbean Geological Conference in Santo Domingo, Dominican Republic in March 2008. Former professor at the University of Havana, Patrick Charles, also predicted in 2008 that a massive earthquake would hit Port-au-Prince in the near future. While some are turning to the Bible, especially the book of Revelations, which pretty much, sums everything up. People of faith, still believe, in spite of chaos.

The catastrophe in Haiti was surely not forgotten at this year’s 67th annual Golden Globe Awards show that took place on January 17, in Beverly Hills. Celebrities pledged their support and wore red ribbons in solidarity of the earthquake-hit country. Brad Pitt and Angelina Jolie, and Globe winner Sandra Bullock donated $1 million to Doctors Without Borders —an organization which offers medical treatment to those in need. So many celebrities have digged in their pockets for the aid effort. Humanitarian and Oscar-winning actor George Clooney has been working almost around-the-clock organizing “Hope For Haiti” a global telethon, which he will co-host with Haitian born singer Wyclef Jean. The actor has already enlisted Bono, Justin Timberlake, Alicia Keys, Sting and Christina Aguilera, who will all perform.

Hollywood’s leading ladies shined in lavender, violet, periwinkle and shell pink. From slinky, to sassy, to utterly ridiculous, the celebrities each wore gowns their own way, with lots of strapless gowns and many ruffles. Some just felt very uncomfortable walking the red carpet in light of the humanitarian crisis in Haiti. They were quick to deflect attention from their couture gown, to what was going on in the world. Sandra Bullock who was named best actress in a motion picture drama for her box office hit “The Blind Side,” seemed very humbled. Upon receiving her award for “Julie & Julia,” the veteran actress Meryl Streep gave a histrionic speech.

Celebrities of the music world are also joining in to show their support. My Twitter follower, Lady Gaga has announced that all the proceeds from her Monster Ball gig in New York will go towards helping Haiti.

Since the Globes are usually a prelude to the Oscars, I strongly suggest you go mortgage your house and put the money on “Avatar” for the Oscars. The sci-fi epic won the Globes for best picture/drama prize and will likely pass “Titanic” as the No.1 grossing film ever by the time nominations are announced in a couple of weeks. Congratulations to James Cameron, who reclaimed his place as “king of the world.”

Rose’s Scoop: While it’s way too early to start predicting, “American Idol” hopeful Katie Stevens, 16, has soulful vocals, and a compelling back-story about her Portuguese family. She’s definitely one to remember.