UNITED STATES—YouTube star, “Paloma for Trump” who harassed her on Monday, April 6, after wearing a hat in support of President Donald Trump.

In the video, the woman who took offense to the hat is heard taunting her and calling Paloma Zuniga, who is of Mexican descent, “a racist.” The hat is a red, white and blue with “Trump” written across the front.

Canyon News spoke with Zuniga who indicated she was not pursuing charges against the woman who assaulted her.

“I am not trying to send out a message of hate by any means. The statement was made when the video itself went viral,” said Paloma.

Paloma told Canyon News that the woman never hit her or tried to take her hat. In the video, Paloma can be clearly heard “saying, don’t touch me,” as the woman attempted to grab at Paloma and get her hands on the phone in Paloma’s hand. She didn’t want Paloma recording her behavior.

A police officer that responded to the call at the post office  recognized Paloma and said “I KNOW YOU” 😂 I have seen you at Trump Rallies and there is one at 2 pm at 700 San Ysidro Blvd., make sure you go.”

Zuniga is a legal immigrant and her family migrated to the U.S. when she was 10 years old. She currently has dual citizenship in both the United States and Mexico. Zuniga explained that she chooses to live in Mexico because she owns a business there where she rescues dogs and cats. 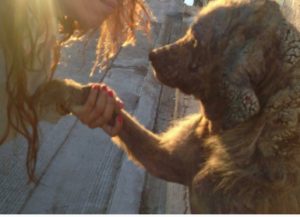 She added that the “abuse, destruction and the invasion of America [she has witnessed]. I am thankful for President Trump because he gave me a voice to stand up for what I believe in.”