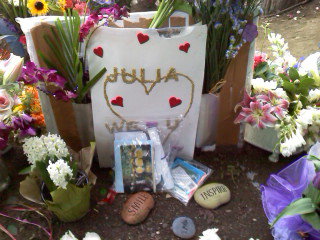 BRENTWOOD—On February 26, 13-year-old Julia Siegler was struck and killed during an accident while crossing a crosswalk in Brentwood. The incident was originally thought to be a hit-and-run, but police later ruled that the drivers involved had remained at the scene.

Police believe that two drivers were involved in the accident. One was the owner of a black Mercedes, and the other motorist had been driving a black Toyota. Neither of the drivers are facing any charges and as of press time, police were calling the death the result of tragedy and an accident.

One of the main culprits in the accident may have been the street itself. The fabled drive is known for its breathtaking views and historic sites, but also for its at-times narrow lanes, highly curvaceous turns and spirited drivers. After a traffic accident, it is not unusual to see flowers or markings commemorating the victim. Soon after the deadly incident, well-wishers left flowers and signs to honor the 13-year-old, and to encourage drivers to have caution.

Siegler’s birthday would have been later this month. A memorial service was scheduled for the teen on Monday, March 1 at University Synagogue. It was estimated that over 1,000 people showed up to pay their respects to the eighth grade student whose young life was tragically cut short. Jamie Siegler leaves behind her mother, father and older brother.

Since news spread of Siegler’s passing, friends have created various groups on Facebook to mourn her loss, including the creation of “RIP Julia Siegler,” which had 2,851 fans as of press time, and “Rest in Peace Julia Siegler,” which had 5,834 members as of press time. Friends left messages outlining their love and loss, with postings such as “I truly do miss you,” “What makes me saddest is when I think of what could’ve been” and “It’s only been six days, but those six days have been the longest of my life.”

The morning of the accident, it is believed that the young Harvard-Westlake student had been crossing Sunset Boulevard to catch her school bus, when she was accidentally hit by both drivers at approximately 7:20 a.m. According to reports, the young victim had been crossing the street on a red traffic signal when she was accidentally struck by the side view mirror of the first vehicle, then knocked off balance and run over by the second vehicle.

Both drivers remained at the scene until the girl was transported to the Ronald Reagan UCLA Medical Center, where she later died from her injuries.