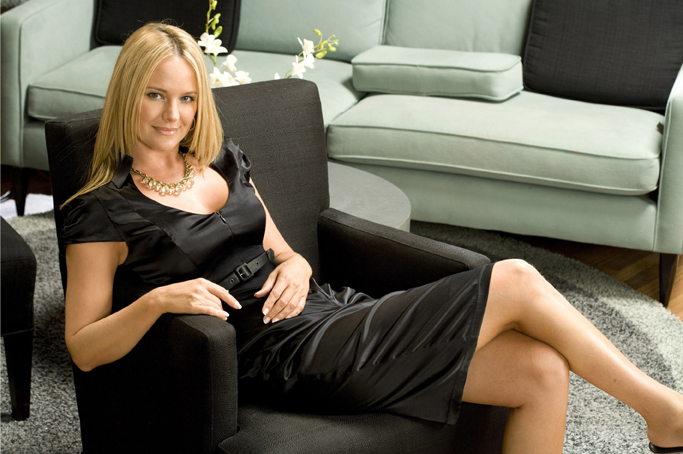 MALIBU—Sharon Case is best known to millions of TV viewers around the world as the ever suffering heroine, Sharon Newman, on CBS’s mega hit “The Young and the Restless.” The show is helmed by Bel Air resident Maria Arena Bell, who is the show’s head writer and executive producer. On Friday I caught up with the beautiful blonde stunner after she left the William J. Bell Studio at CBS TV City, and she shares news of her latest project with Canyon News exclusively. Sharon is really psyched about her upcoming jewelry line called POMP. Fans remember as Case pointed out that her character on “Y&R” was directly involved with one of Newman Industries’ most lucrative beauty lines on the show. “I enjoyed the Beauty of Nature storyline I was involved with on the show. So this is definitely something my character Sharon [Newman] would also be doing. I am very excited about the future of POMP,” said Case.

On Tuesday, August 10, at 2 p.m. EST and PST the talented actress makes her debut on the QVC Network unveiling her new jewelry line called POMP. Watching QVC is somewhat a family affair for the actress. “Tommy, my mom is a huge fan of QVC. She has been watching for years, so when this opportunity became available, I was excited to debut my line nationally on QVC,” said Sharon. “You know my best friend Elis [Inanc], who is a stylist, who has helped me with my Emmy gowns for years. We also love to go shopping together, which is why we’ve put this business together as a team. I appreciate her help so much. Finding the right piece of jewelry is always fun for us, so we decided to put our brains and skills together on this project. I’m very pleased with our products. Although my line officially rolled out during the weekend of the Daytime Emmys in Las Vegas last month, it will make it’s national debut on QVC in August.”

When Case walked red carpet events in Vegas last month, fans and onlookers who are used to seeing the stunning southern California blonde look beautiful were pleasantly surprised to see her new jewelry. As the star points out, she’s extra happy this time around for the added attention. “Tommy, I was walking through a casino in the hotel going to an event and a man actually called out my name and asked me about the necklace I was wearing. It was a gold chain mesh with rhinestones necklace, that will become available in a few months. The one I am debuting on QVC is one of my favorites as well. This jewelry was something I wanted women to be able to wear with casual chic and jeans or with elegant gowns. It’s definitely chic, fun and hip,” said the beautiful actress.

I asked Case if she’s at all nervous about her debut on the QVC Network, knowing that actresses like Susan Lucci have also appeared on debuting their lines. Sharon replied, “No way. I’m used to television as you know and I do interviews many times on camera. I’m actually not nervous at all, but excited about it. QVC is a great place to be.”

Sharon describes her jewelry for herself. However, I have recently heard raves from many of her peers in the industry, that she’s always the hottest and sexiest lady on red carpet events and her jewelry is also receiving compliments from her costars on “Y&R” and many stars in Hollywood.

Fans however know Sharon best as Sharon Newman on “Y&R,” so I had to ask her what she thinks of the state of her phenomenally successful daytime drama. “Tommy, right now the show is great. I love Maria Bell. She’s such a talented and great writer. One thing you can always count on is exciting storylines from her. I love everything she’s written for my character and all the great storylines going on right now. What she does is amazing, her twists and turns are always shocking and she even adds a comedic beat in many of the dramatic scenes, that delight the viewers and us actors on the show. She’s very supportive of all of our endeavors, both on and off the set,” concluded Sharon Case.