On this day, for safety reasons, the number of people participating in the graduation ceremony in Korea is limited to 80,000, and over 300,000 people will participate in the completion ceremony online and offline by live broadcast on YouTube and worldwide in 9 languages.

The graduation ceremony on this day was prepared in preparation for safety accidents due to a high concern about safety issues in the recent months. The Shincheonji Church of Jesus said, “Above all, to hold the graduation ceremony safely, we prepared with safety as the top priority for the first, second, and third stages. We operate a situation room that checks and maintains order and monitors with the police, fire department, Daegu City, and Suseong-gu Office safety officials.”

In addition, “The church itself deployed a total of 14,000 security guards to maintain order inside and outside the venue, and had them enter and exit over the span of 4 hours to prevent crowds of people,” he said. Four ambulances and emergency officials were also on standby. Emergency rescue training was conducted for all safety personnel, and all trainees also watched the emergency rescue video. It is emphasized that this graduation ceremony was especially thorough in safety,” he explained. 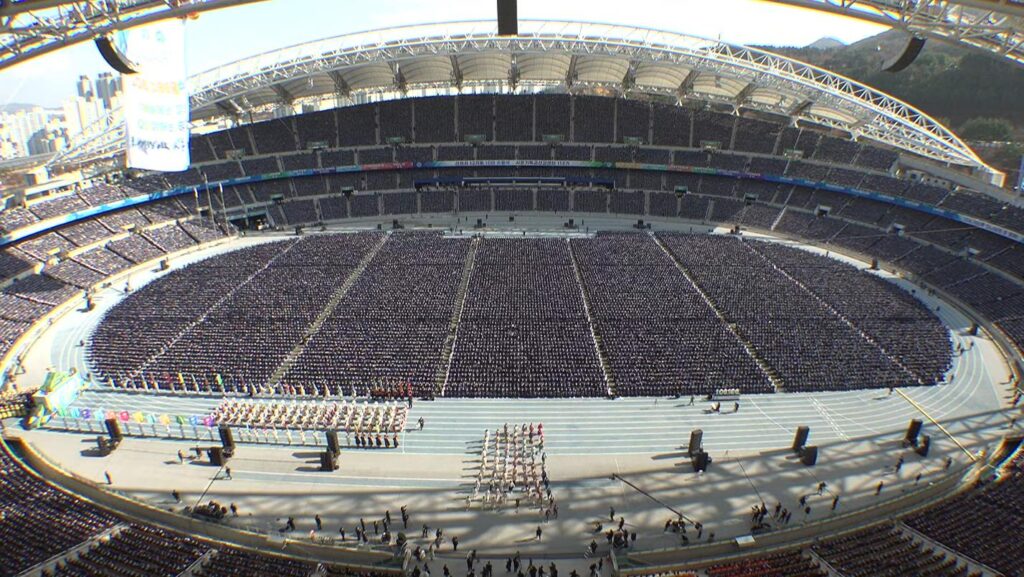 Among the graduates of the 113th class, a total of 522 pastors, 37 domestic and 485 overseas, have increased significantly compared to previous years. This background is closely related to the creation of an online course environment due to COVID-19. As an environment was created in which students could attend lectures without being conscious of others, the number of pastors and seminary students increased rapidly. The two representatives of the graduates presenting their graduation testimony on this day are also pastors.

During the COVID-19 pandemic, elementary and secondary education courses, including the Book of Revelation (high school), were released on YouTube, and pastors who encountered them were able to participate in education online without being conscious of others, which is the reason for the increase in pastoral graduates.

In fact, Mr. Heo Jeong-wook, who presented his impressions at the graduation ceremony as a representative of domestic graduates, is an incumbent pastor who is serving as a second-generation minister. After 20 years of ministry, he said, “I only learned traditional theology at seminary school, but I didn’t know much about the Book of Revelation. Except for advanced sermons, he has taught only the sermons that are easy to convey to the saints. He repents that he was a sinner who added to or subtracted from the word of God,” he said. “I put down everything I had and came forward to the truth. He completed his course by learning the real theology that leads to heaven, not human studies. I thank God for giving me a chance at life,” he said.

Mr. D. Jackson, the representative of overseas graduates, is also a pastor in India. After taking an online Bible class at Shincheonji Church of Jesus in October of last year, he signed an MOU and changed the name of the seminary he was operating to “Hepto Zion Christian Mission Center.” Currently, 294 members, including pastors in charge of two churches belonging to the denomination, completed all courses at the Zion Christian Mission Center and were listed as part of the 113th class graduates.

Meanwhile, Shincheonji Church of Jesus held its first large-scale face-to-face event in Daegu after the COVID-19 pandemic, focusing on contributing to the revitalization of the local economy and coexisting with local residents. We tried to be of practical help to residents by having all possible consumption activities, such as transportation for 100,000 people, lodging, and meals for staff, take place in the region.

Also, after the Itaewon disaster, we agonized over whether or not to hold the event itself, but instead of giving up the win-win opportunity in consideration of contract conditions with local companies, we decided to focus on safety as much as possible, daring from past experiences in hosting large-scale domestic and international events.