HOLLYWOOD—On the Fourth of July, conservative actor James Woods, 71, shared on his Twitter that his talent agent dropped him via email. Woods screen-shotted a picture of Ken Kaplan’s email to his 1.59 million followers. Woods is best known for his roles in the films “Casino,” “Once Upon A Time in America,” “Videodrome” and “Contact.” 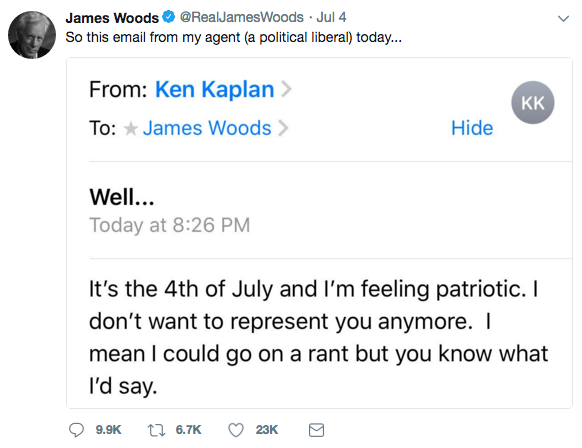 Woods tweeted his reply to his agent which read: “Dear Ken, I don’t actually. I was thinking if you’re feeling patriotic, you would appreciate free speech and one’s right to think as an individual. Be that as it may, I want to thank you for all your hard work and devotion on my behalf. Be well.”

On Saturday, Joe Piscopo was invited onto Neil Cavuto’s Fox News segment called “Cavuto Live” to weigh in on the subject. Piscopo, also an actor, musician, writer, and radio host laughed and said, “I can’t believe it, it was inexcusable. James Wood is a great guy, he’s got over a million and a half Twitter followers, and his agent took 10 percent of the Twitter account I’m sure that’s what happens.”

Cavuto asked, “Why do you think the agent chose to do it then?” Piscopo answered, “I can’t figure it out, it might’ve been just to make publicity for himself.”

“James Woods said some riveting, very true things on Twitter, and maybe that was what upset the agent,” said Piscopo.

Cavuto asked Piscopo about his opinions regarding political intolerance in relation Woods’ situation, to which Piscopo said, “It seems to come worse from the left than from the right, although both sides get crazy.”

Cavuto wanted to know how Piscopo is able to get along with other big Hollywood names who are Democratic, or left-leaning, to which he replied, “If you say anything nice about Donald J. Trump they will come after you a little bit and it’s very, very frustrating because all we want is what’s great for America. Our families come from other countries, the immigrants are the fabric and the texture and the mosaic of the country.”

The host compared the situation to Robert De Niro’s recent comments about Donald Trump, and said none of these instances, “Advance the debate.” Piscopo added, “It’s not based on reality, a lot of it’s show business. (But) Everybody’s got to stop the hate.”