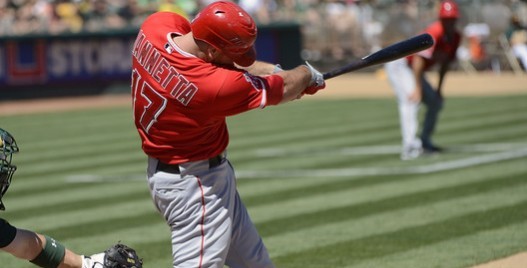 ANAHEIM—The Los Angeles Angels beat up on the Detroit Tigers with one of their most impressive offensive showings of the season on May 29.

“As bad as it looks, we’re still in a really good spot,” said Iannetta. “The majority of the last year we were playing .500 ball, then we got hot in little stretches—and by the end, we had 98 wins.”

The Angels may be in the midst of another one of those streaks this season.

Pujols, who hit his ninth homer of the year, has hits in four straight games.

Joyce homered for the second day in a row and has three multi-hit games in the past week. Over his last 51 plate appearances, Joyce has hit .293 with a .412 on-base percentage and a .512 slugging percentage.

Iannetta, who hit the Angels’ first grand slam since June and first by an Angels catcher since Jeff Mathis in 2008, has raised his batting average from .091 to .178 in just three weeks.

Wilson (3-3) struck out seven and walked five. The left-hander allowed his only run in the third, hitting two-time AL MVP Miguel Cabrera on the right foot with the bases loaded after giving up a leadoff single to James McCann and 2 two-out walks.

Buck Farmer (0-1) made his first start of the season for the Tigers after getting recalled from Triple-A Toledo, and was charged with seven runs and nine hits in five-plus innings. The 24-year-old right-hander, a fifth-round draft pick by the Tigers in 2013, was 5-1 with a 2.98 ERA in nine starts this season with the Mud Hens.