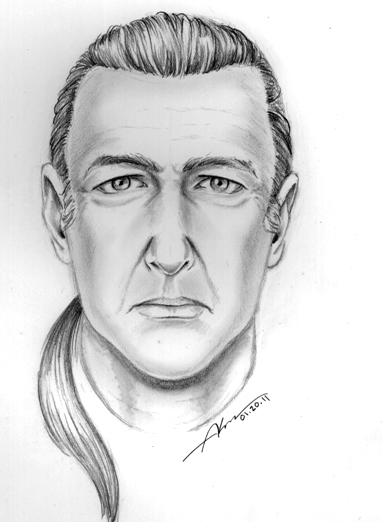 WOODLAND HILLS—On January 20, police sent out a news release asking for the public’s assistance in locating a suspect who shot a Los Angeles Unified School District police officer on Wednesday, January 19. The incident began shortly after 8 a.m. when Officer Jeffrey Stenroos was patrolling El Camino Real High School in a black and white marked vehicle. He was later flagged down by an individual who informed him that they spotted a Caucasian male who was peering into parked cars behind the school. At around 11:30 a.m., Officer Stenroos spotted a man matching the description of the suspect on the 5500 block of Manton Avenue.

The Los Angeles Police Department blog stated the following, “Officer Stenroos, believing that the male might be a burglary suspect, stopped his police car and got out to investigate.  The suspect suddenly fired a handgun at Officer Stenroos, striking him once in the chest.”  The bullet forced the officer to the ground, but he was wearing a ballistic vest that prevented the bullet from piercing his body.

Canyon News contacted the Los Angeles Media Relations Section about the incident; however, detectives in the case are not yet disclosing any information as they are still investigating.

When asked how vital it was that Officer Stenroos was wearing the ballistic vest at the time of the shooting, Officer Karen Rayner, of the LAPD Media Relations Section, stated to Canyon News, “I can tell you the ballistic vest absolutely saved the officer’s life. I was at the press conference when the head trauma doctor explained how the bullet hit just below the left nipple and would have gone right through the heart, lungs, and many vital blood vessel systems. The doctor was convinced the vest saved his life.”

Michael Brodey, a good Samaritan who was driving by the incident, spotted Officer Stenroos and was able to use the police radio to call for help.  Brodey, who was a member of the U.S. Coast Guard Auxiliary, provided assistance to the wounded officer until responders arrived.  He was treated at the Northridge Hospital Medical Center for a bruised chest and injuries he sustained to his head after falling.

Authorities have not been able to locate the suspect in the shooting. He is described as a male Caucasian, in his mid-to-late 40s with long, grayish hair pulled into a pony-tail. He is 5 feet 9 inches to 5 feet 10 inches tall and 160 to 170 pounds with a thin build. The suspect was last seen wearing a dark-colored jacket, possibly a bomber jacket or hooded sweatshirt and denim jeans.

According to a press release from Los Angeles City Councilman Dennis Zine, on Friday, January 21, he called for a $75,000 reward leading to the identification, arrest and conviction of the suspect in the shooting, which was unanimously passed by the council.  The Los Angeles Police Association, the Police Protective League, the Los Angeles Fire and Police Association all donated $5,000 each, bringing the total reward to $90,000. David Gold, the founder of the 99 Cents Only Store, contributed $9,999.99 to the reward and Councilman Zine added the extra penny bringing the reward to $100,000.

Anyone with additional information is asked to contact Los Angeles Police Department RHD Homicide Special Section Detective Myers or Diaz at 213-486-6850.  During non-business hours or on weekends, calls should be directed to 1-877-LAPD-24-7.  Anyone wishing to remain anonymous should call Crimestoppers at 1-800-222-TIPS (800-222-8477).  Tipsters may also contact Crimestoppers by texting to phone number 274637 (C-R-I-M-E-S on most keypads) with a cell phone.  All text messages should begin with the letters “LAPD.” Tipsters may also go to LAPDOnline.org, click on “webtips” and follow the prompts.