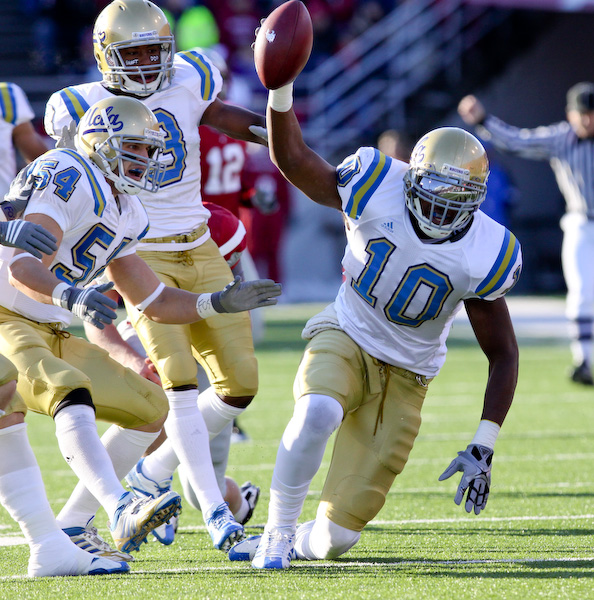 WESTWOOD—With every passing week football season gets closer and closer for fans all over the world, but for the players it started as soon as the last one ended. The Bruins have been training for months to try and build the successful end to 2009, and make 2010 a year to remember.

Tomorrow the Bruins will begin their first day of training camp and prepare for their meeting with Kansas State for the first game of the season. All the weight lifting, sprints at six in the morning, and never ending soreness that the team has endured throughout the off season has been for that moment when they step back on the field to start practice. On Monday the Bruins are back in business and they are out to prove UCLA is capable of controlling a monopoly over the college sports in LA.

USC has always been said to have the better talent and most NFL ready players, but the past few years UCLA has dug out a few gems of their own, and this year is definitely no exception. On defense, All-American safety Rahim Moore and rising star linebacker Akeem Ayers will be taking command of a defense that has been consistently great over the past four years. Former defensive coordinator Dwayne Walker changed the culture of the UCLA defense when he joined the staff in 2006. Even after he departed to take a head coaching job in New Mexico, his toughness and discipline stayed with the team. Moore, Ayers and Co. will be responsible for keeping the opposing team out of the end zone and giving the offense a few extra possessions with some timely turnovers.

Offensively the Bruins haven’t had as much success as their counterparts. Norm Chow was brought in two years ago to try and stir up some magic with the offense, but it has yet to be completely mastered by the young players on the team. Now entering his third year as offensive coordinator, Chow has a lot of the pieces in place to do something special with the offense. Their fearless leader is none other than quarterback Kevin Prince and this season looks to be a breakout year for the young signal caller. Last season, the team responded well to the leadership of Prince. Unfortunately, a broken jaw he suffered in a win over Tennessee caused him to miss a lot of playing time, and his absence was evident in the production of the offense. When he returned Prince was able to right the ship and lead UCLA to their first bowl appearance in two years.

Making the Eagle Bank Bowl last season and winning, was a great accomplishment for a team that looked like a long shot to even make it to post season play, but the Bruins eyes are focused on something much higher. Going into camp the team has one goal in mind, winning a Pac-10 championship. It has been over 10 years since UCLA has been on top of the Pac-10 and taking it this year would show the country that Bruin football is back. Fans might have to wait a whole month for the season to officially begin, but for players like Rahim Moore and Kevin Prince the season is already underway.