UNITED STATES—The latest reports indicate President Joe Biden’s approval rating as of March 22 has slipped to 42 percent from March 1 thru March 18. On the issue of foreign affairs, Biden has a 42 percent approval rating and a 36 percent on the economy. 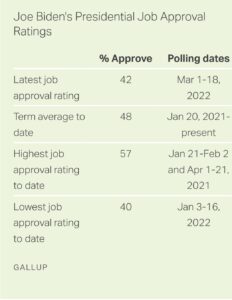 Biden’s ratings were at their highest during his first six months in office. The Gallup Job Approval rating shows a decline that stayed between 40-43 percent which is well below the majority level ratings he initially received.

The ratings among Independents has not risen above 50 percent since July 2021, and as of March 2022, stands at 38 percent.

In February 2021, the  Republican party was at 11 percent, increasing to 12 percent in July 2021, and is now down to a 5  percent approval rating for President Biden.

The Democratic party held a 98 percent approval rating in February 2021. That has since declined to 84 percent.

A drop in approval ratings was first seen following the Biden administration’s response to Afghanistan.

According to reports, the Democratic party approves of President Biden’s handling of foreign affairs. The Independents approval rating on that issue is at 39 percent, while Republicans are at 9 percent.

The graph below reveals Americans approval and disapproval of the government at present.