UNITED STATES—On Monday, October 12, presidential nominee, Joe Biden visited Ohio to speak to the people of Toledo, as part of his Build Back Better campaign.

“The World is watching what is happening in Toledo today. “This state matters and that’s why it’s a big deal. Both campaigns are focusing on Ohio. They’re here because Ohio matters, but they’re also here because Ohio is a toss-up,” said Toledo Mayor Kapszukiewicz. 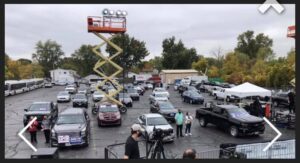 The Biden camp held a drive-in event at the United Auto Workers Hall. Dozens of trucks lined up and sounded their horns agreeing with Biden’s statements.

“215,000 dead because of COVID. Experts say we are liable to lose another 200,000 in the next few months unless we take some serious action,” Biden said.

Biden spoke of the importance of being able to keep a job, blaming President Trump for a rise in the number of COVID-19 cases. “He doesn’t know what he’s doing, he panicked,” Biden added, “and all he cares about the stock market.”

He cited negligence saying, “Trump knew about the coronavirus back at the end of January.” Individuals returning from the Hubei province of China were required to quarantine for 14-days to halt the spread. On January 24, the CDC confirmed two cases of COVID-19 brought into the U.S. from two individuals who visited Wuhan, China where the outbreak originated.

Foreigners coming from the mainland of China were forbidden to travel into the U.S. as of February 2.

Biden indicated that in the next 4-6 years that, “The United States, not China leads the world in modern technology.”

“We are the only country in the world that has come out of a crisis stronger than when we went in,” he added.

His next campaign event was held in Cincinnati, Ohio.

You Know You Can Sell Life Insurance You No Longer Need