WEST HOLLYWOOD—Mel’s Drive-In, a family-owned restaurant on Sunset Blvd, is bringing back its carhop service along with the drive-in movie theatre experience. The movie “Grease” will play on Sunday, September 27. 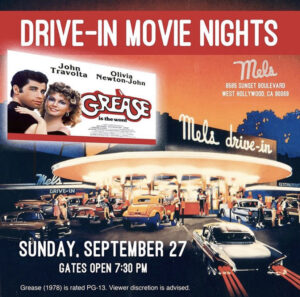 Colton Weiss, the restaurant owner, said his family decided to bring back their carhop service tradition due to the COVID-19 pandemic.

“That way, people have a nice safe place they can eat in their car. And it’s still like that retro vibe to the whole thing,” said Weiss. Mel’s Drive-In was started more than 70 years ago by Weiss’ grandfather.

Mel’s Drive-In has been struggling at the beginning of the pandemic because of all the restrictions on restaurants. Weiss believed the combination of carhop service and the drive-in movie theatre can help them get customers in. “We wouldn’t be here without our customers. So, we really appreciate our customers and the people who love Mel’s.”

“We’ve always wanted to do a drive-in movie. So, we finally decided to make sure that happens. We did it. It’s been a huge success,” Weiss told Canyon News. He runs the restaurant with his brother Chasen, his father Steven and their partner Gabriel Mendez.

Mel’s Drive-In began the outdoor movie nights on September 20. Weiss said tickets for the next three Sunday movie nights were already sold out, adding that they’ll consider having a Friday movie night in the near future. “We’re very excited. We’re showing ‘Grease’ this weekend. I got a lot of people dressing up, ready to sing and dance. So, it should be fun.”

The restaurant on the Sunset Strip in West Hollywood that was opened in 1997 is the second location of Mel’s Drive-In in Southern California.

Mel’s Drive-In was founded in 1947 in San Francisco when the “drive-in restaurant” was still a new concept in the United States. The original location provided carhop service to customers and could accommodate 110 cars. “Burger City” in the 1973 film “American Graffiti” was actually filmed there.