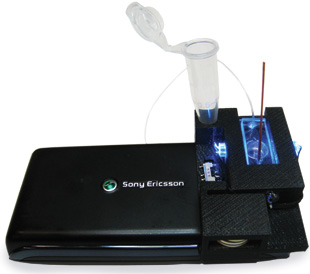 WESTWOOD—A creative invention using a simple cell phone turns a microscope into the top innovation of 2011 by The Scientist, a magazine that focuses on life sciences research and technology. UCLA Engineering Professor Ayodgen Ozcan developed this compact, lightweight and inexpensive microscope that can be used to monitor healthcare in many impoverished countries across the world.

The microscope LUCAS which stands for (Ultra-wide field Cell Monitoring Array platform based on Shadow imaging) was ranked number 1 amongst 65 other entries were judged by the journal for its “Top 10 Innovations.”

LUCAS is an easy-to-use, pocket-sized holographic microscope which weighs less than 50 grams. The microscope itself costs as little as $10 and can be attached to a camera of a cell phone. One of the ways it has been used for research is by taking blood and saliva samples that can be placed onto chips which slide into the side of the microscope. This special technology can be used to research diseases like HIV and Malaria as well as to test the quality of water after a disaster has occurred.

Based upon research, Algorithms created by Ozcan’s research group quickly monitor and count red and white blood cells and micro particles within fluid samples. Images from LUCAS can be sent to several hospitals by cell phones for analysis by health care professionals.

In a statement released by Ozcan he speaks on the convenience of a cell phone on modern medicine. “We have more than 5 billion cell phone subscribers around the world today, and because of this, cell phones can now play a central role in telemedicine applications,” said Ozcan.

“Our research group has already created a very nice set of tools that can potentially replace most of the advance instruments used currently in laboratories,” added Ozcan.

Professor Ozcan has been honored with such prestigious awards such as a Presidential Early Career Award for Scientists and Engineers, a National Science Foundation, CAREER award and a list of many others.

The Ozcan Researach Group at UCLA has an innovative vision to “create photonics based telemedicine technologies toward (the) next generation (of) smart global health systems.”