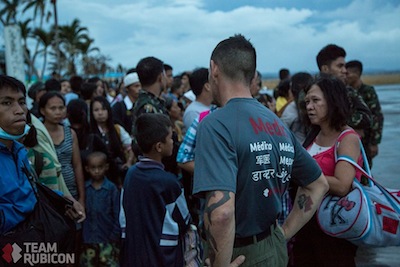 Team Rubicon, a disaster relief organization of military veterans and first responders based in El Segundo, launched Operation Seabird to help the millions of people affected by the typhoon.

The organization announced on its website that a team of 15 specially-qualified volunteers was deployed to the hardest-hit city of Tacloban on Leyte island in thePhilippines on Sunday, November 10. The TR service members, partnered with three veteran volunteers from the Making Change relief organization in Norway, will be focused on search and rescue efforts, patient extraction, transporting medical response kits from Direct Relief and providing medical triage for victims in Tacloban.

Mammoth Medical Missions set up the temporary hospital that has 17 surgeons able to service up to 100 patients at a time. According to Team Rubicon’s latest news post on November 12, more than 100 surgeries have been performed as of Tuesday, November 12. Most of the operations are amputations, with the chief medical officer reporting that nearly every patient arriving to the field hospital is carrying infection.

Operation Seabird volunteers took off from LAX airport Sunday night outfitted with packages of personal protective equipment (PPE), such as protective clothing and utilities to sustain themselves for several days upon arriving in the disaster-stricken areas.

The volunteers reportedly landed in Manila around 11:50 a.m. local time on Tuesday and were transported by the Philippine Air Force in a C-130 to Tacloban City, according to a Team Rubicon news post. Philippine officials in Manilareportedly told the organization that Team Rubicon was the only confirmed official search and rescue organization in the area.

The U.S. Department of State declared on Veteran’s Day that it was working with Team Rubicon to help execute Operation Seabird in the Philippines. Secretary of State John Kerry wrote on the Department’s website, “Just as they [Team Rubicon] did after Hurricane Sandy, these veterans will be using the skills they learned in uniform to help others recover from this terrible storm.” The United States has pledged monetary relief funds and is working with partners in the region to provide food, water, shelter and hygiene supplies.

Operation Seabird announced that it would be sending a secondary team of four logisticians the night of November 12 “to establish a supply chain for the team in the field” and a third team of “additional search and rescue specialists, doctors and WASH (Water and Sanitation for Health) specialists” by Saturday, November 16. Team Rubicon said they would continue to adjust their strategy as more intelligence from the ground is gathered and assembled.

The volunteers, selected from all over the country, were screened on criteria such as medical certifications, search and rescue experience, availability, and TR volunteer history. On Tuesday, November 12, Operation Seabird declared that after two days of traveling, the team was finally in Tacloban and heading 30 miles south to Tanauan where the Mammoth Medical Missions hospital is located.

The category-5 Super Typhoon Haiyan was the strongest tropical cyclone of the year and possibly in recorded history. The U.S. Navy’s Joint Typhoon WarningCenter recorded sustained winds speeds reaching 195 mph and gusts of 230 mph, creating a 15-foot storm surge that wiped out the city of Tacloban.

Philippines President Benigno Aquino III told CNN the initial estimates of 10,000 casualties is false and that the death toll is now estimated to be between 2,000 and 2,500.

Team Rubicon encourages those interested in helping volunteers provide disaster relief for victims of Typhoon Haiyan to donate money on their website. The Operation Seabird Campaign hopes to raise $125,000, and all donations will be matched by their supporters; the Tecovas Foundation, Toast our Vets, an anonymous donor from NYC, Lucy Monroe and the San Juan United Way.

The veterans’ disaster relief group also invites individuals with relevant medical experience to register by following a link on their Facebook page, stating that they would contact those whose “background meets the needs of this complex mission.”