SHERMAN OAKS—It’s a circus experience unlike any other. For more than 46 years, Circus Vargas has been entertaining families and bringing smiles to all ages after being started by Clifford Vargas in 1969. Longtime friends of Vargas, Roland Kaiser and Joseph Muscarello, and management executives of the show, stepped in to keep the show moving after Clifford passed away in 1989.

With producers and co-owners Nelson and Katya Quiroga taking over the helm in 2005, audiences can expect a once in a lifetime experience. They formed Tabares Entertainment, Inc. to continue the tradition of keeping the charm and integrity of the historic Circus Vargas. Nelson has participated alongside his brother Alberto in dangerous acts including the 2004 Flying Tabares which won the “Golden Clown” statuette at the Festival International du Cirque de Monte-Carlo. Katya attended the Conservatorium for Ballet and Music in the Netherlands.

Canyon News had the pleasure of speaking with Katya Quiroga about Circus Vargas and its upcoming appearance in Sherman Oaks in October. “Our performers bring international flair from all over the world. We interact with our audience members and will provide the opportunity for pics with performers,” said Quiroga.

When asked what people might be surprised to learn about acrobats and aerialists, Quiroga responded, “We are artists. We train for years, studying and coaching to create an art form.” She indicated that when you perform for a live audience you give a bit more; it allows one to provide joy to others. Katya informed Canyon News that she is a seventh generation performer and there are multiple generations that are part of the Circus Vargas family. She noted her daughter who is 18, is now an eighth generation performer to the show. She informed us that she had a fear of heights, but she gets an adrenaline rush being able to fly in the air.

When asked by Canyon News about the company’s involvement in community outreach programs they interact with during the year, Quiroga responded, “We have a partnership with Childhelp which helps abused kids nationwide help find homes and services.” She noted that the organization helps make kids’ lives better in America.

Canyon News also spoke with Jon Weiss, who is also a performer and plays the Interactive Host for the show. When asked about what he enjoys about being a circus performer, Weiss responded, “I think it’s the fact that we’re in a unique position where ordinary people are doing extraordinary things. We’re creating a smile on people’s face.”

When asked about his time on the CBS reality series “The Amazing Race,” Jon noted that it was an experience that emotionally and physically changed his life. He and his partner Al indeed wanted to win the $1 million prize, but didn’t want it to change who they were as people. The experience “humbled” him said Weiss.

When asked about his act as “Iron Chin,” Weiss told Canyon News that he can balance almost anything. “This year I will balance a 16-foot ladder.” He added that he has balanced a running chainsaw, shopping carts and a host of other items. He is aiming to break a world record. He noted that 10 years from now he hopes Circus Vargas will become a must-see show that is more elaborate. Currently, there is only one unit, but he’s hoping two units will eventually take place and Circus Vargas expands to the Midwest and East coast.

Such acts families can enjoy during the show include: Upside Down, Trampoline, Aerial Lyra, Wheel of Death, Clown, Magic, Flying Trapeze, Straps, Risley, Globe of Death and for 2015 there is the new experience, ArleQuin.

ArelQuin tells the story of a boy who goes to bed and dreams of being in a circus and the various experiences that come with it. The audience gets to see all of those emotions unfold. When asked about what Circus Vargas wants audiences to remember when they leave their shows, Quiroga responded, “That they have fun and an experience that lasts a lifetime. People talk about coming as kids, and we want people to come to the show and to be able to forget about their problems.” 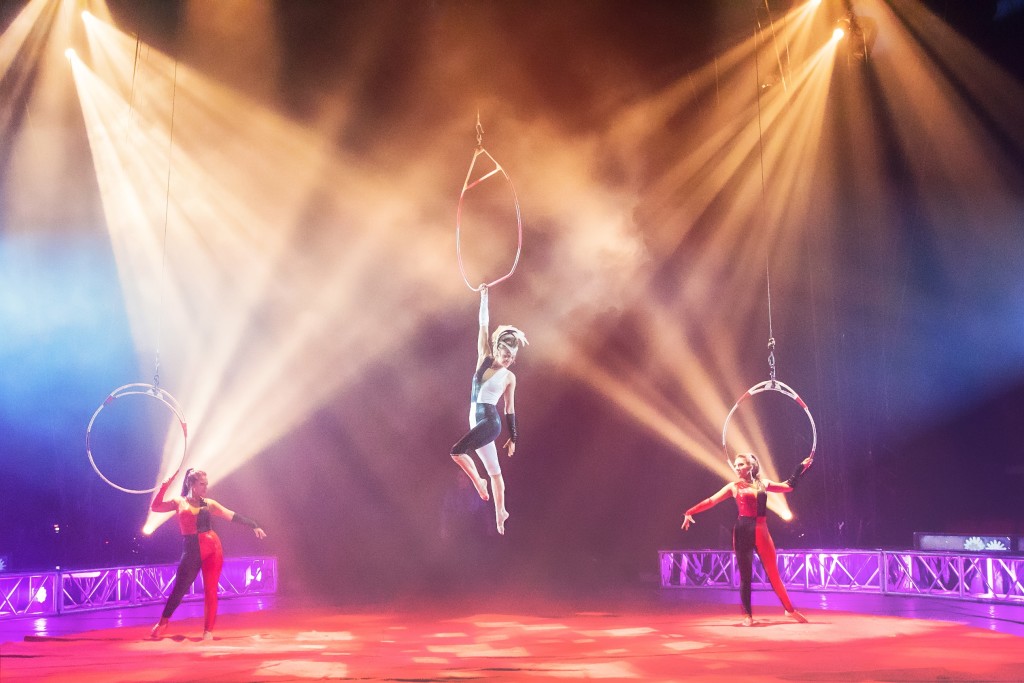 The theater-style tent seats 1,500 people comfortably. The tent consists of 90,000 square feet of fabric and is supported by 500 individually placed stakes and over four miles of rope and cable weighing over 17 tons. The entire setup represents an outlay of a cool million dollars!

Each set-up day, at the crack of dawn, 30 men start the seven-hour process of raising the Big Top, and each tear-down night, by the light of the moon, the same 30 men roll the tent up and pack it carefully to travel to the next town, where the process begins anew.

Circus Vargas is unique because they don’t use animals during their show. “It’s an animal free experience, that is committee to entertaining audiences and creating a memory that lasts a lifetime,” said Weiss. For those who saw the movie “Water for Elephants” starring Reese Witherspoon and Robert Pattison, they will be surprised to know that Circus Vargas made an appearance in the flick.

Circus Vargas will arrive in Sherman Oaks at the Westfield Fashion Square at 14006 Riverside Drive on October 8. They will be at the venue until October 19. To purchase tickets by phone call 877-GOTFUN1 (877-468-3861). For additional information about ticket pricing and the show visit: https://www.showclix.com/event/ShermanOaks1/tag/widget. To learn more about the history of Circus Vargas visit http://www.circusvargas.com/. It is sure to be an experience one will never forget!