An indictment was unsealed on the DOJ website against the CEO of an online payment processing company, in addition to seven others, charging them with conspiring and trying to conceal conduit and excessive campaign contributions, and other offenses during the 2016 U.S. Presidential election and afterwards.

The announcement was made by Assistant Attorney General Brian A. Benczkowski of the Criminal Division and Assistant Director in Charge, Timothy R. Slater of the FBI’s Washington Field Office.

Several people were indicted by a federal grand jury on November 7, 2019, in the District of Columbia, where the 53 count indictment includes charges against Ahmed “Andy” Khawaja, 48, of Los Angeles, California, who was charged with two counts of conspiracy and three counts of making conduit contributions, 13 counts of making false statements, 13 counts of causing false records to be filed, and one count of obstruction of a federal jury investigation.

George Nader was charged with conspiring with Khawaja to make conduit campaign contributions and related offenses. Nader, who is also a lobbyist, and unofficial liaison between Washington politicians and the Arab Emirates, and is a convicted sex offender. Nader is currently in federal custody on charges unrelated to this indictment.

According to the indictment, from March 2016 through January 2017, Khawaja allegedly conspired with Nader to conceal the source of more than $3.5 million in campaign contributions directed to political committees associated with a candidate for President of the United States in 2016.

Khawaja and Nader are charged with funneling the funds for illegal foreign contributions to a 2016 campaign that the DOJ did not name. According to reports, financial records indicate that the Hillary Clinton campaign was the recipient of illegal donations.

The Department of Justice reported the contributions appeared in the names of Khawaja, his wife, and his company. Nader allegedly made contributions in an effort to gain influence with high-level political figures including the candidate, Hillary Clinton.

While Khawaja and Nader, arranged payments, Nader allegedly reported to an official from a foreign government about his efforts to gain influence. The indictment alleges that Khawaja conspired with six aforementioned individuals to conceal excessive donations of more than $1.8 million from various committees allowing Khawaja to host a large fundraising dinner for an elected official in 2018. 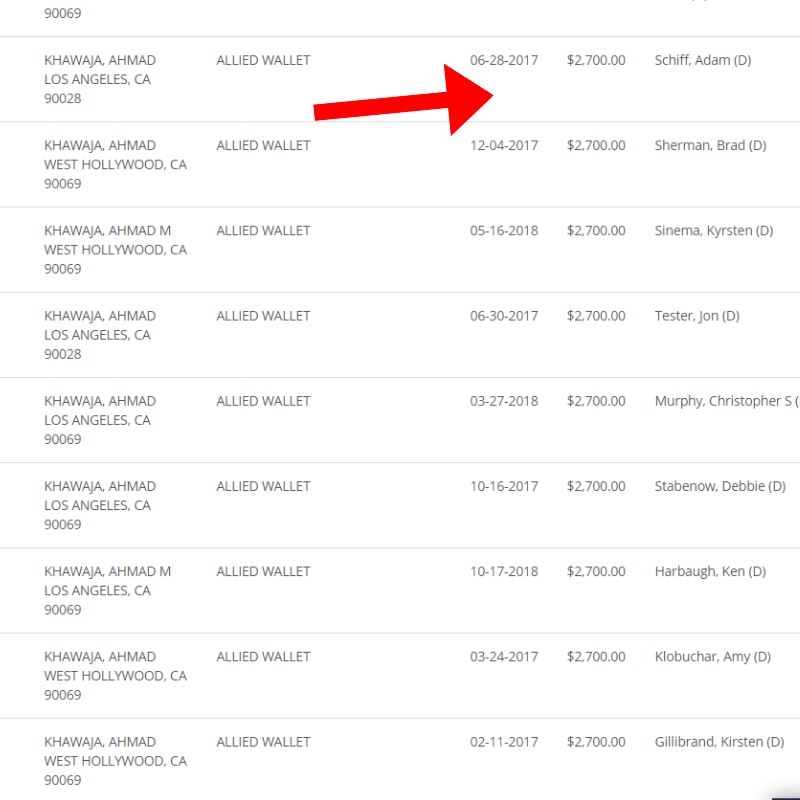