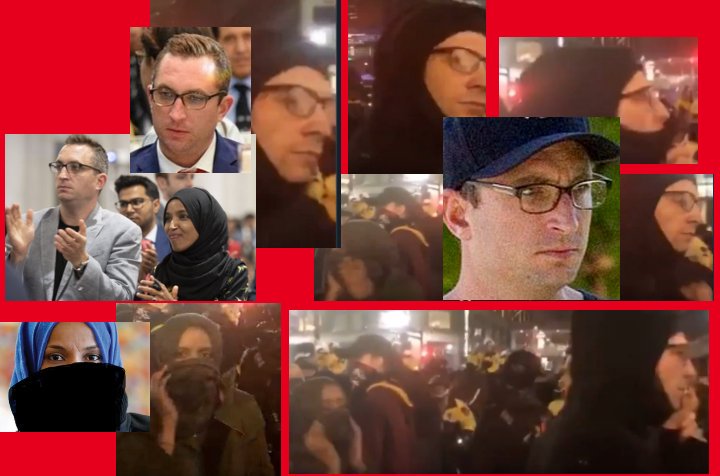 UNITED STATES—U.S. Congresswoman Ilhan Omar of Minnesota was allegedly seen amongst the protesters, with Antifa at President Trump’s rally in Minneapolis on October 10. Video footage captured outside of the Target Center has been circulating on social media with Omar, and her alleged husband, Tim Mynett, who works as a political consultant.  The couple can be seen with the hate group, Antifa. 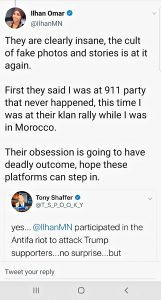 Omar serves as the congresswoman for the  5th Congressional District in Minneapolis and some of its suburbs. She sent out a string of tweets with anti-Trump rhetoric prior to and following the rally.

“First they say I was at the 9/11 party that never happened, this time I was at their klan rally while I was in Morocco,” said Omar. She  added, “Their obsession is going to have a deadly outcome, hope these platforms can step in.”

In another tweet, Omar called President Trump an “America-hating socialist.”

“His hate is no match for our movement,” said Omar in the tweet.

“Wish I was there last night to stand with you Sis @RepAishaGomez, thank you for holding it down for all of us last night. We love you and remember, love trumps hate!,” tweeted Omar praising Gomez.

The information was discovered and reported by Judicial Watch in the form of a written complaint, when Omar was under investigation for perjury, tax fraud, immigration fraud, and marriage fraud. The last statement of the September 2019 complaint read as follows:

“At the very least, such violations constitute a breach of the Code of Ethics for Government service which subjects officeholders to a higher standard.”

Canyon News reached out to Judicial Watch for comment, but have not heard back in time for print.