UNITED STATES−On Friday, February 28, Democrats in the House of Representatives blocked an amendment requiring doctors to use life-saving measures if a baby is born alive during an abortion.

Rep. Greg Walden (R-OR) and Rep Ann Wagner (R-MO) presented the Born-Alive Bill, where Walden points out in video that babies who are already born, and Democrats in the House voted that they should be left to die.

“We know that the younger the child the more vulnerable and defenseless they are and the more these children need our help.  That’s why we offering a final amendment to the bill that literally would save the lives of the youngest children, the babies.  I would hope that we could agree to end the ghastly practice of letting die without medical help children when they are born alive after an abortion. Providing literally life-saving medical care to these babies is something we should all find common ground and support.  It is the right thing to do for the children.  For the children. These are not fetuses that are born. These are tiny little babies that are struggling to live.”

Dems just BLOCKED an amendment offered by @repgregwalden & @RepAnnWagner that would require healthcare practitioners to administer care to newborn babies – irrespective of how they're born. #BornAlive pic.twitter.com/WnGmQUvvz1

“BREAKING: Once again, Republicans led by @AnnWagner took matters into our own hands on the Floor because Pelosi refuses to allow a vote on the #BornAlive Act.” Scalise continued. “But abortion extremist Dems again BLOCKED protections for newborns from being killed by an abortionist.”

Reporters asked House Minority Leader, Kevin McCarthy, “Do you believe that a fetus that survives abortion is a human being?” McCarthy replied:

“Yes, I do. I almost every person in the world would believe that too. It’s a heart that beats. It’s a lung that breathes, and to me in any definition that would be murder.” 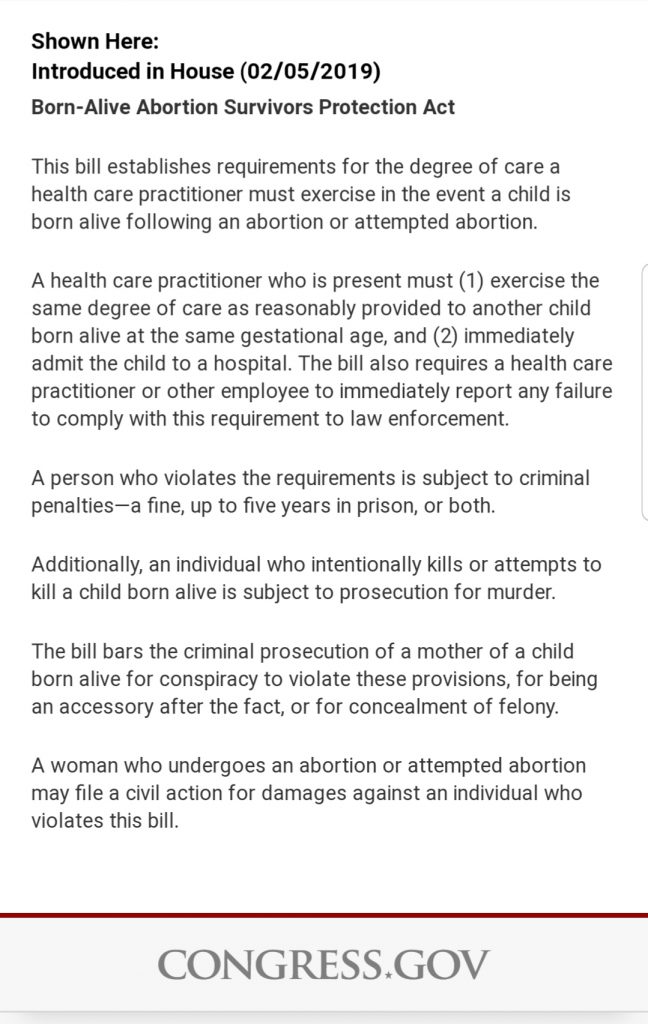 According to Congress, the Born Alive Act or H.R. 962 is a bill that requires life-saving measures for an infant that has already survived an abortion stating that a healthcare professional must 1.) exercise the same degree of care as reasonably provided to another child born alive at the same gestational age and 2.) admit the child to the hospital. The bill requires a healthcare practitioner or other employee to immediately report any failure to comply with this requirement to law enforcement.