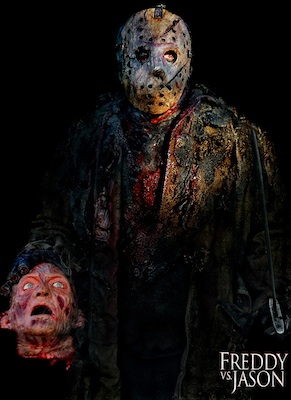 BRENTWOOD—Douglas Tait is a handsome leading man in Tinseltown who is often covered up from head to foot in monster makeup for the big screen action. The man is superbly talented and very nice as well. He’s known as a director’s actor, because he’s always willing to do what he is asked to do in order to make the part better and his exceptional skills don’t just start or stop in front of the camera. His recent film “In The Name of Freedom,” alongside acclaimed Latina filmmaker Isabel Cueva, is winning accolades at every Independent film circuit in the nation. My friend Doug knows that one of my favorite genres is horror films, so he takes our readers into the world of Jason Vorhees and also we ventured into “The Land of the Lost.” In his first in depth interview, you get to know the man we all call Doug, here in Hollywood.

Q-Doug, What do you prefer acting, producing or directing?

A-“Tommy, I definitely prefer acting. Producing is great because I can hire people I want to work with and hire my talented friends, and directing is something that I would like to do more of in the future, but my passion is and always has been acting. My passion has grown even stronger for acting since I started 13 years ago.”

Q-You have also done a lot of stunt work. How did you get involved in that field?

A-“I have always been a very physical actor, and with my height, 6’5”, and look (shaved head) usually gets me cast in roles that involve a fight or some kind of stunt. After getting cast as several bad guys, I became friends with a bunch of stunt men. It was a big eye-opener once I realized how many of these stunt guys were getting acting roles for getting into a fight or doing a fall. These guys have no interest in acting either, yet they are given lines on TV shows and films that a trained actor would kill for. That is the main reason I got into stunts, to give myself more opportunities as an actor, and it has paid off.”

Q-I have to ask this, since you’ve done so much work wearing makeup and costumes in films and on TV. Why would someone with such a handsome leading man face cover it up so often?

A-“Well, thank you for the compliment. I am very fortunate that I am part of a small group of guys, who get the opportunity to play creatures and monsters in big budget films. It all started as a kid. I loved Halloween and dressing up. As soon as I turned 16, I got a job at Universal Studios Hollywood, playing Frankenstein. From years of being there it turned into more work in television and small projects as characters behind prosthetic makeup. In 2003 I landed my big break behind Jason Vorhees Hockey mask in the ending scene of ‘Freddy vs. Jason.’ And as you know, Tommy most recently, I played the Head Sleestak in ‘Land of the Lost’ [2009] and the long face bar alien in J.J. Abrams’s ‘Star Trek’ [2009]. This character was created by my good friend Barney Burman, who won this year’s Academy award for Best Makeup. I have built a good following in the horror and Sci-Fi film world, and have been given such great opportunities because of my face being covered up, so I am grateful for that. Besides, I love playing these characters that are different from myself.”

Q-Recently a film you helped produce titled “In The Name Of Freedom” received a lot of acclaim. Will you and the filmmaker be doing more dramatic documentary pieces in the future?

A-“My producing partner Isabel Cueva and I are having a great run with our film ”˜In The Name Of Freedom.’ This film is opening a lot of doors for us in Hollywood, which were previously shut. The attention and awards we have received from this project has far surpassed anything that we could have imagined. Isabel and my producing partner Chris [Cashman] of Carts, Goofyfoot and I are currently working on a few feature film scripts and are in meetings with investors for our future projects.

Q-What projects do you have in the works? Anything in horror?

A-“Tommy, you sure love that horror genre, don’t you? I just finished a horror film that was shooting in Spokane called ”˜Knights Of Badassdom,’ starring Steve Zahn, Peter Dinklage, Ryan Kwanten and myself. I also star in ‘One By One: Deaths Door,’ which is currently in post-production. Also, I just offered another horror film to start shooting in October.”

The handsome and talented actor doesn’t mind covering up that million-dollar face to make a scary movie character work. Keep an eye out for his name on the billboard, he’s one of Hollywood’s up and coming superstars. Doug is featured in the following documentary Announcing MEN IN SUITS | Wyrdstuff and will appear as a celebrity guest at this November’s HorrorHound event.

All Photographs are Courtesy: Douglas Tait’s personal collection
DISCLAIMER: This article was a contribution made by an outside agency or person. The content has not been verified by Canyon News. Please exercise your due diligence prior to relying on this article for factual information. Canyon News is not responsible for the views, words, and opinions of contributors.