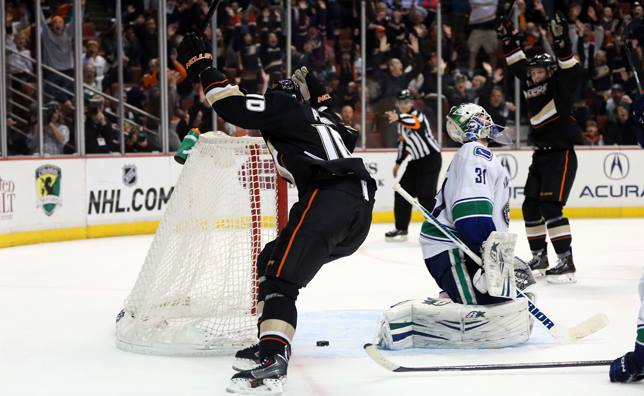 ANAHEIM—Corey Perry found enough time to save the team’s winning streak. The Ducks leading scorer shot the game-winning goal with two seconds left in overtime to edge the Vancouver Canucks at Honda Center Sunday night. It gave Anaheim a three-game winning streak to live with for another day.

After handing Edmonton a 5-2 wallop at home, the Ducks met up with bigger opponents, beginning with the Canucks who are two points from playoff contention in the Pacific Division. Their recent offensive success came hard after losing their first road loss of 2014 to Los Angeles. Ryan Kesler put the Canucks up 1-0 into the first on a drive that zipped by the shoulder of Jonas Hiller for his 17th of the season. Ducks right winger Kyle Palmieri putVancouver back on the man advantage less than a minute later after leaving the bench too soon, putting six men on the ice. Henrik Sedin took advantage of their second power play by scoring on a drive helped by his brother Daniel on the far end to help him record his tenth of the year.

Palmieri, frustrated with the early rush the Canucks were putting on and the mistake, let it out on Brad Richardson as both traded fighting majors to end the period. Vancouver outshot the Ducks 12-5 in what looked to be a great start for the short two-game road trip to Southern California.

The Ducks had enough of being on the wrong end of the puck and got right to work with Saku Koivu scoring 24 seconds into the second period on a messy start, bringing the puck into the Canucks’ end. Andrew Cogliano saved the play, finding Jakob Silfverberg open at center for a drive shot that deflected the stick of Koivu in the end. The play not only became the start ofAnaheim’s dominance of the period, but also the pair of power plays handed to them in order to gain the ground lost. Matt Beleskey evened the score on a backhander that was good for his third. The Ducks outshot the Canucks 20-2 in what was considered a lopsided period of hockey.

The Canucks caught a lucky break of 1:06 into the third period with Kevin Bieksa scoring his second, giving his team the lead. It was all they could spare as Vancouver found no further effort to respond nor could the Ducks let go of their momentum. Anaheim added another 20 shots towards the net of Eddie Lack who took over for Roberto Luongo due to an injury sustained Saturday. As time went along, the shots became too much for the second string goaltender as Nick Bonino was left wide open on the stick side as he tied the game with 90 seconds left in regulation to force overtime.

It was Vancouver’s last chance to make a game they surely meant to lose a stab in the Ducks’ rear, but it went unanswered. Anaheim took just four shots in the five minutes allowed before a shootout became necessary. Perry made a response that he felt different about giving the Canucks more time. On a power play provided by Bieksa for hooking Bonino, he took a shot ahead of the Canucks defense with two seconds on the clock that found the back of the net; it became the ultimate nail in the coffin for Vancouver.

Hiller earned his 20th victory with 17 saves on the night, giving him a .911 save percentage for the present. The Ducks meet against the Boston Bruins on Tuesday as they hold the lead in the Atlantic, winning their last two.