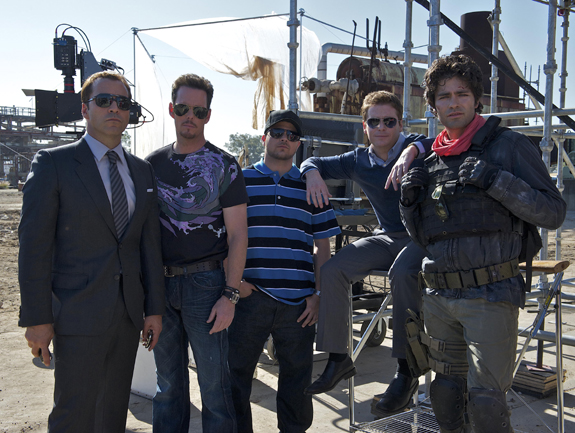 HOLLYWOOD— There is a reason Jeremy Piven is an Emmy-winning actor. His portrayal of Ari leaves very little to the imagination. His almost gale force wind-style of acting is truly a force of nature to watch. He has obviously observed his own agents to realize how to pretend to be one. On Sunday night, Ari’s euphoria after making an NFL pitch to a group of Hollywood high rollers was greatly tempered when he learned that Lizzie may be siphoning off some of his prized clients. Nothing is more frightening to an A-list talent agent in Hollywood than to lose clients to a disgruntled former employee.

Turtle received a south-of-the-border business pitch from Alex, who said she has forgiven him for mistreating her, but he continued to have a hard time believing that he wasn’t being used. Drama enlisted Bob Saget to help him smooth out a rough first impression with John Stamos, a potential sitcom co-star. Eric and Scott decided to patch things up, so that they could continue to guide Vince’s career together. Eric had better watch his back as Scott is a typical cut-throat entertainment agent, whose ambition is about to get the better of him. Vince continued on his high-anxiety, taking chances lifestyle, putting Eric and Ari in fear of his new outlook on life.

The episode was written by Doug Ellin and directed by Adam Davidson. Maybe there were no explosions on Sunday night’s episode, but the drama is growing to a fever pitch.