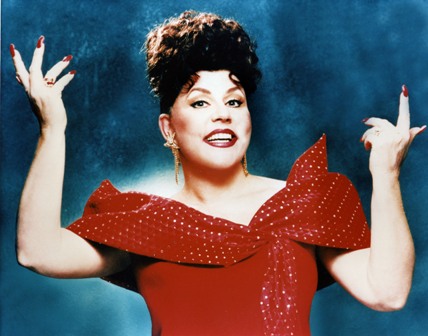 HOLLYWOOD—For four decades, Ethel Merman was the reigning royalty of the Broadway stage. She was at her peak during the most creative and brilliant time of what is considered one of America’s singular art forms. During her era, Merman introduced songs, characters and stories that have remained a permanent part of our culture. Launched off-Broadway at New York’s John Houseman Theater, Rita McKenzie’s personal success with “Ethel Merman’s Broadway” triggered an international tour, taking her to Carnegie Hall, Pasadena Playhouse, Harrah’s Casino Hotel in Atlantic City and on an SRO eight-city tour of Japan. The production is currently planning a limited Broadway engagement. “Ethel Merman’s Broadway” has been dubbed the longest running one-woman show in theatrical history alongside its count part, Hal Holbrook’s longest running one-man show, “Mark Twain Tonight.”

Ms. McKenzie recently completed a critically acclaimed 10-week run of “Ethel Merman’s Broadway” at the Nederlander’s Broadway Series at the Gem Theatre in Detroit. This past fall she played the show at the Laguna Playhouse where critics hailed the production and performance as one of the tops of the season. Ms. McKenzie has performed in the national tour of Neil Simon’s female version of “The Odd Couple.” Co-starring with Barbara Eden, McKenzie was honored for her outstanding portrayal of Olive Madison with a National Broadway Theatre nomination as Best Actress in a Touring Play. McKenzie and Eden had previously completed a successful tour of “Gentlemen Prefer Blondes.” She starred in the Los Angeles premiere of the off-Broadway musical “Ruthless!” at the Cannon Theatre and can be heard on the original cast album. She created the role of Phoebe Farber in Sam Harris’s production of “Hurry! Hurry! Hollywood!” in Los Angeles, and she played Maggie Jones in “42nd Street” with Mariette Hartley. Her other starring roles include Aldonza in “Man of la Mancha,” Ruth in “The Pirates of Penzance,” Belle Poltrine in “Little Me,” Domina in “A Funny Thing Happened on the Way to the Forum,” Cleo in “The Most Happy Fella,” Widow Corney in “Oliver!”, and Nurse Custer in “Whoopee!” In addition, Ms. McKenzie also toured the country in Merman’s signature role as Annie Oakley in the 50th anniversary production of “Annie Get Your Gun” opposite Glenn Yarbrough. She has also played Reno Sweeney in “Anything Goes” and of course, Mama Rose in “Gypsy.”

An accomplished TV and film actress, Ms. McKenzie played Alice, the housekeeper, on Fox’s “The Brady Bunch: The Final Days,” has guest-starred on NBC’s “Caroline in the City,” and will be recalled for her roles as Mrs. Littlejohn on NBC’s “Frasier,” Rita Marcus on the Family Channel’s “Big Brother Jake,” and her recurring role on “Daddy Dearest,” starring Richard Lewis and Don Rickles.

In addition to having conceived and directed both the off-Broadway and Pasadena Playhouse productions of “Ethel Merman’s Broadway,” director Christopher Powich wrote and directed McKenzie’s nationally acclaimed symphony “Pops tribute to Ethel Merman.” He directed McKenzie and Carole Shelley in a re-enactment of Ethel Merman and Mary Martin’s famous 1995 television medley at New York’s Rainbow and Stars Nightclub. Mr. Powich directed the premiere production of Ralph Frederick’s “Snap Shots” at the O’Neill Center in Waterford, CT and in Boston. He is currently preparing a revival production for Off Broadway. He continued his association with McKenzie when he created, directed and performed with her in “Class Act,” a nightclub revue which toured the Eastern United States.

David Snyder is the musical director/arranger for the 12-piece orchestra. Other production credits include: setting by Yael Pardess, lighting by Driscoll Otto, costume design by Eric Winterling, projections designed by David Foster, sound design by Matt Kraus and wig design by Paul Huntley.

WHAT/WHO: Rita McKenzie, one of Broadway, Hollywood and television’s most versatile actresses, returns to Hollywood in her internationally acclaimed tour de force show, “Ethel Merman’s Broadway,” which re-creates the life and times of Ethel Merman, the Queen of Broadway’s Golden Age. Under the direction of Christopher Powich, McKenzie triumphs in a role in which she seems to channel the great theatrical icon.