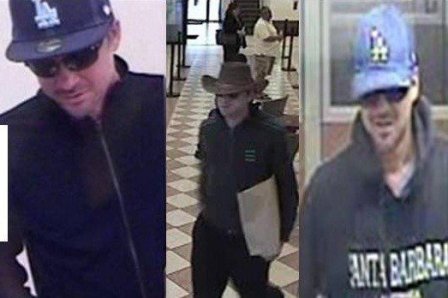 SANTA MONICA—The FBI and Los Angeles Police Department are searching for two male, serial bank robbers that have hit a combined total of 19 banks in the Los Angeles area since December 2012 and as recently as January 7 of this year.

The men have been labeled as the “Valley Bandit” and the “Westside Gun & Bag Bandit” by the FBI in order to link robberies from several different locations. Authorities have labeled them as “unrelated cases” since there is no information on a relationship between the two men or any connection.

The Valley Bandit has been described by witnesses as a Hispanic or Middle Eastern male between 25 to 35 years old, between 5 feet 9 inches to 6 feet tall and weighing between 180 to 200 pounds. He has been seen getting into a white vehicle, described as a Mercedes SUV, and is also linked to a four-door black Mercedes sedan. He has frequently threatened victims with a weapon generally described as a revolver.

The Westside Gun & Bag Bandit often wears sunglasses and alternates between a baseball cap and a cowboy hat. Like the Valley Bandit, he also threatens with a weapon, but carries it in a brown paper bag that he then uses to hold the stolen money.

He is described as a white male between 35 to 45 years old, 5 feet 9 inches to 6 feet tall and weighing between 160 to 180 pounds. The Westside Gun & Bag Bandit has struck the following locations:

According to a press release from the FBI, U.S. Bank is offering a reward of up to $10,000 in exchange for information leading to the arrest and conviction of the person responsible for the robberies linked to the Westside Gun & Bag Bandit.

A Lesson To Teach Children To Save A Life On Father’s...

“The Chi” Recap: ‘The Spook Who Sat By The Door’