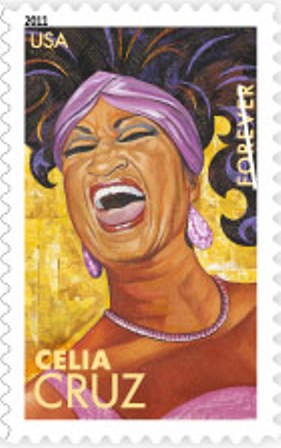 The stamps, which went on sale nationwide the same day they were released, feature Selena Quinta Ã±illa-Perez, Carlos Gardel, Carmen Miranda, Tito Puente and Celia Cruz. Each artist is recognized for their contribution to American music.

“From this day forward, these colorful, vibrant images of our Latin music legends will travel on letters and packages to every single household in America,” said Vice President of Government Relations and Public Policy Marie Therese Dominguez.

The stamps are part of a project by the United States Postal Service (USPS) in collaboration with Art Director Ethel Kessler and Artist and Musician Rafael Lopez, “Latin Music Legends,” according to a statement released by the USPS.

“My goal was that when you see the stamp, you hear the music,” said Kessler in a statement.

Selena Quinta Ã±illa-Perez, more widely recognized as Selena, captivated audiences with her Tejano music and so is also known as “Queen of Tejano.” Carlos Gardel contributed his touch of tango music in the United States and was also an actor in the Spanish-Language cinema. Carmen Miranda appeared in 14 Hollywood musicals and recorded over 300 songs, adding to them her taste of Samba. Tito Puente is known as “The King” because he recorded over 140 albums using Afro-Cuban and Caribbean styles. Celia Cruz, the “Queen of Salsa,” was a performer and singer who recorded more than 50 albums.

“[In the stamps] these people are sweating, they’re closing their eyes, and they’re belting out these tunes. Latin music is all about moving and dancingand feeling that beat,” said Lopez in a statement.