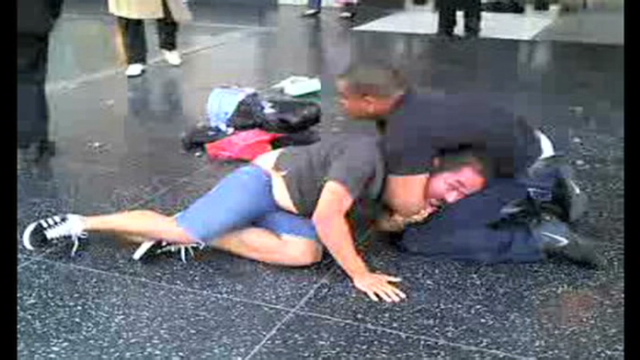 HOLLYWOOD—Attorneys for Alejandro Rea have threatened to sue Forever 21 if they do not issue a satisfactory statement and settle the case. Rea was taken down by force by a security guard outside of the retailer when the guard suspected he was a shoplifter.

On Saturday, August 7, the suspect failed to respond to the alarm system, which was activated as he left the shop located on Hollywood Boulevard.  His actions prompted security personnel at the retailers to follow him out onto the street.  When he did not respond to the alarm, or to their vocal cues, the security guard took down Rea by force.  A bystander shot footage of the incident, which was posted to YouTube.  The footage has been viewed by almost 600,000 people and has widely publicized the controversial event.

In the video, one can see another man trying to intervene. This man is Pablo Rea, Alejandro’s brother. The video shows Pablo trying to get the attention of the guard in order to alert him to the fact that his brother is deaf and could not hear the alarm.  In a news conference, Pablo, who is also deaf and was being assisted by an interpreter, said of the incident, “There was no communication. I was shocked. I thought the security, they would know they would have a notepad or something”¦ it just looked like they tackled him like an animal.”

Alejandro Rea is currently in prison and faces charges of second-degree robbery for unpaid merchandise found in his personal bag; he has a history of petty theft. The attorney for the Rea brothers has said that the two men plan to go ahead with a lawsuit, but will try to meet with the retailer first.  Forever 21 could opt to settle this out of court, but if they do not, the brothers plan to file the suit.