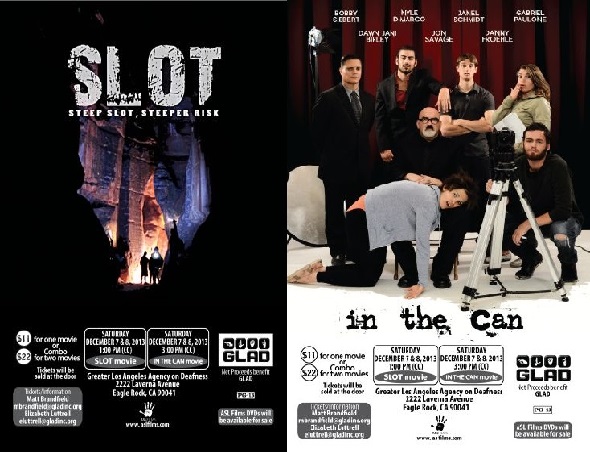 LOS ANGELES—The Greater Los Angeles Agency on Deafness (GLAD) will screen the films “SLOT” and “In the Can” for the deaf and hard of hearing on Saturday, December 7 and Sunday, December 8.

The film “SLOT” follows a group of people into the narrow crevices of a canyon called “slots.” Using a documentary-like film style, the movie portrays a group of people who were misled by the director and producer of the documentary they were participating in and have to deal with what lies in the dark when night falls.

The film, “In the Can” introduces us to Nicky (Bobby Siebert,) an aspiring director given the chance of a lifetime to direct his own feature length film, provided that he gets every aspect done on his own; such as finding actors , a crew, renting equipment, etc. What started as a dream turns into a nightmare as Nicky discovers the man that hired him is not who he thought he was.

“SLOT” will be shown at 1:00 p.m. followed by “In the Can” at 3:00 p.m. The screenings will take place at 2222 Laverna Avenue in Los Angeles. Both films are rated PG-13 and the cost for a ticket is $11 each. Tickets can be purchased at GLAD’s upcoming events page: http://www.gladinc.org/events/upcoming-events-and-workshops or at the door.