AMERICA—Greta Thunberg admits falling into a depression and obsessing over Climate Change, when she was 8 years old. Climate Change is a controversial theory that has grown-ups confused on both sides.

When I was 8, I was dancing to a song called “Stupid Girl” by Garbage… which fits Greta well. This mentally disabled child is proving to be nothing more than an opportunist blindly following her narcissistic wannabe famous parents.

CHILD ABUSE. I agree with this self-claimed activist… that she should be angry for those who “have failed her” and “stolen her dreams and her childhood.” She should be upset because she “should be in school instead of going all over the world fighting” something she knows nothing about. She should be angry at her parents for manipulating her into the spotlight for their political agenda.

It’s not surprising that Greta’s father, Svante Thunberg, was an unsuccessful actor, author, arts manager and producer. The 50 year-old has-been anything, but famous. I would venture to guess that Greta’s protest notes have been written by Mr. Thunberg. Greta’s mother, Malena Ernman, calls herself a famous Opera singer.

What a travesty to have been born to those parents. Both daughters have been diagnosed with Aspergers, obsessive compulsive-disorder, depression and even an eating disorder, yet they parade their daughter around encouraging her to fight for what? A political cause? Why not teach their kids to make a change. If every parent would do that instead of teaching their kids to be angry and hateful.

What makes Greta (rather her parents’ choice of activism) so sure that Climate Change is so detrimental to our future?

VACCINES. I bet they vaccinated her without researching the poison that went into their baby’s bodies. They were so brainwashed into conformity to question it. Why not look into that and see how that might be a cause to Greta’s Aspergers… and further it might be a mass extinction of our future.

FOOD CHEMICALS. What about protesting the deadly chemicals they’re putting on our fruits and ingesting into innocent animals strictly out of greed. Processed foods and chemicals implemented within our foods are poisoning us. Why not protest that… it might create the mass extinction of our future.

HYPOCRITICAL. She’s nothing more than a hypocritical politician. She insists on taking a yacht to America, eating freeze dried food and using a bucket as a toilet. The self-righteous know-it-all brat created more emissions in her alternative travel plans to visit to America to protest than if she had taken a plane. 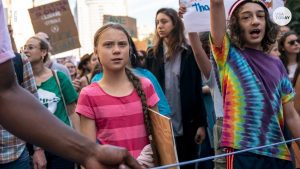 To create a yacht that is zero emissions, many more emissions were spent. Then most importantly she came with a camera crew and her father and then had to have a crew fly out to take the yacht back. Then they have to fly out another crew to pick her up and another crew to take the yacht back to America. All that waste, to bring the self-proclaimed earth friendly activist to protest. Greta, we have so many of you out here already, we don’t need you. So much for her claiming her travel was zero emissions. Her trip was anything but zero emissions.

The signs made to protest, the litter left behind, the flights for others to join the protest is anything but saving the planet. Why not fly to a city in need and help. Go to California and start helping the homeless people. Stop your stupid marches and actually do something. Stop talking and help!

Greta thinks all the kids around the world are following her. Think again, they just wanted to have a free school day.

HISTORICAL DOOM DAYS. Climate Change is not the first scare.

TURN OF THE CENTURY (2000). As a child, I gave up a trip to Disneyland on New Year’s Eve, the last day of 1999 because I wanted to be with my parents when the world ended. We were told the world would end at the change of the century.

My responsible selfless parents’ response was that it wasn’t true. It was a political lie. They kept telling me everything is going to be alright. They were there to discuss with me my fears, not instill new baseless scare tactics. They deferred me to my faith in God, so I felt hope and reason to be a good person.

Still, I was scared after hearing everyone talk about Doom’s Day being January 1, 2000. But the worst thing that happened was our clocks on our computers went berserk at times. No biggie!

NOSTRADAMUS (1980s). The generation before me watched in terror how Nostradamus proclaimed the world would end in the 1980s. Nostradamus was quite convincing as he predicted so many things, even 9/11, but it depends on how you translate it.

BOMB SHELTERS (1950s). The generation before that were taught how to do bomb drills because they were going to experience a nuclear bomb and all be killed. People went out and purchased bomb shelters.

WAR OF THE WORLDS (1930s) Before that, there was War of the Worlds radio show by Orson Welles. In 1938, his popular radio show announced that aliens were coming and people jumped to their deaths. How similar is that to what you are doing in your fear mongering of other children. You are spreading evil poison. You are making many kids worry and scared. You are spreading hate and misunderstanding instead of looking at the positive and using your energies to help those in need, the elderly, the homeless, the drug addicts and the disabled.

CLIMATE CHANGE IS A CONVENIENT CAUSE.

ABORTION. What about all the babies killed every year in late term abortion (and now even at birth). This is mass killing as you speak about. Would you protest abortion past the first trimester? Probably not, because people like you and your parents believe its a woman’s choice. Since a woman has more rights than an innocent fetus.

HOMELESSNESS. Lets start with Los Angeles and San Francisco and New York and Seattle. We have huge homeless problems. Why isn’t Greta spreading her clan to protest the homeless people not having homes. Why aren’t they putting on hazmat suits and cleaning up like one Republican activist did last weekend in Los Angeles.

The dirt and debris is running into the ocean. Why are you talking so much, go start picking up the trash. Oh, wait that takes effort, something you generation knows very little of how to do.

POLITICAL CHILD ABUSE. Every generation and topic has a scare and it comes with a cost and benefit. The cost is our youth feeling insecure and unsafe on our planet, the benefit is politics. 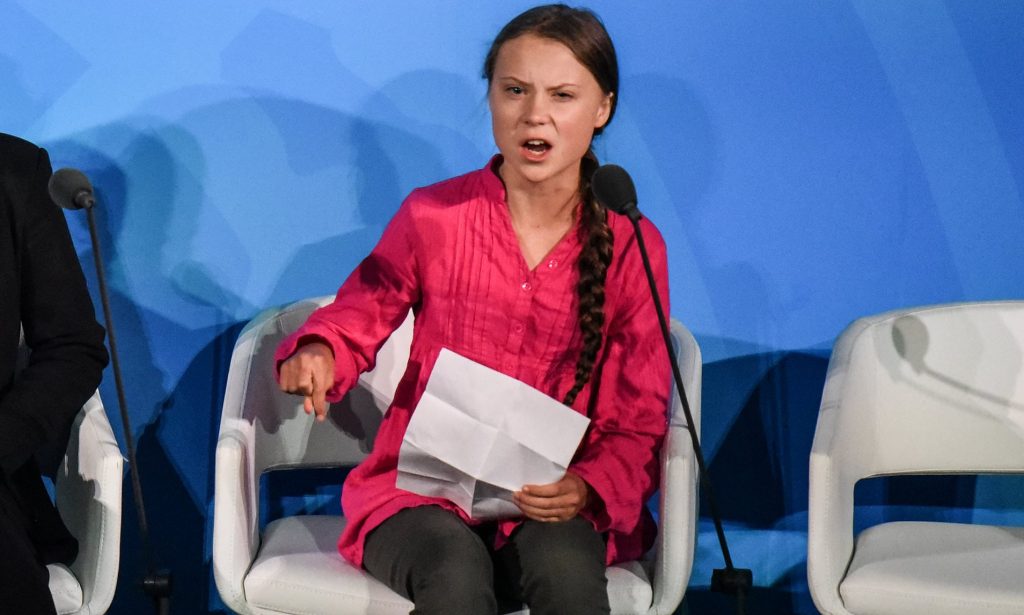 Greta Thunberg is regurgitating what she is being told. She knows nothing. She’s mimicking the politics of her parents. For parents and educators to inflict the fear, hate and bitterness on children for their own political gain, is not only sickening, its outright exploitation.

Your generation is filled with egocentric brainwashed cry babies who need safe spaces, gender neutral bathrooms, no individualized thinking, specific pronouns…. and pure evil threats to our future. You tell us… do this or else! If this is what our future is about… we’d be lucky if the world ends in 12 years.

If you were a smart kid, you’d report your parents for child abuse… but you won’t because you’re a stupid girl who thinks you know it all. Back in my day… you’d be sent to your room until your attitude changed. Oh wait… your parents are encouraging this so they are praising you for your drama. 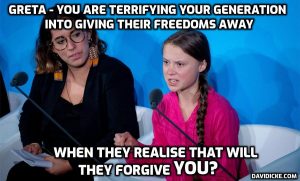