SAN FRANCISCO−U.S. Immigration and Customs Enforcement (ICE) officers arrested two individuals on February 18 at Sonoma County Courthouse. The arrest led to court officials addressing concerns about the rights of an illegal immigrant’s ability to participate in the U.S. judicial system. California Senator Kamala Harris Tweeted out in defense of the illegal immigrants.

I'm deeply saddened to hear of the passing of Rita Walters, the first Black woman to serve on LA's City Council. For decades, Rita fought for equality and representation on behalf of communities of color. Keeping her family in my thoughts. May we all continue her fight.

“California law does not supersede Federal law, and will not govern the conduct of federal officers acting pursuant to duly-enacted laws passed by Congress that provide the authority to make administrative arrests of removable aliens inside the United States. Our officers will not have their hands tied by sanctuary rules when enforcing immigration laws to remove criminal aliens from our communities,” said ICE Field Office Director of San Francisco David Jennings in a statement.

ICE officials explain on their Facebook page the importance of law enforcement working together with information sharing and honoring ICE detainers in order to keep communities safe.

According to BorderReport, one of the individuals arrested was on the suspicion of a felony, a drunk driving charge, and domestic violence. He was detained in a second-floor hallway of the courthouse. The second individual was confronted by a plain clothes agent in the parking lot. Canyon News reached out to reach out ICE agents, but did not hear back before for print. 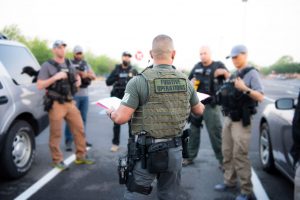 Enforcement and Removal Operations (ERO) of ICE’s mission is to identify, arrest, and remove aliens who present a danger to national security or are a risk to public safety, as well as those who enter the United States illegally or otherwise undermine the integrity of our immigration laws and our border control efforts.

When jurisdictions fail to honor an ICE detainer, it impacts both public and officer safety, and unnecessarily expends ICE’s already-limited resources, notes the organization via its website.