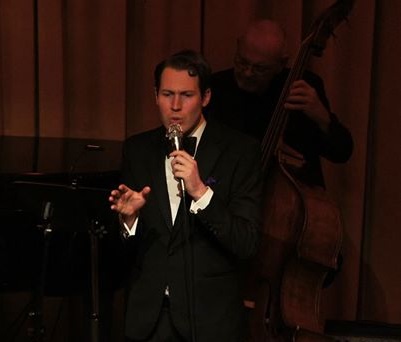 BEL AIR—The 24-year-old crooner, James DeFrances, prepares for his second time gracing the stage at the Vibrato Jazz Club in Bel Air at 8:00 p.m. Canyon News contacted none other than the Baritone singer to speak about the event.

Though he may be known on YouTube through Sinatra-esque covers of popular songs such as Carly Rae Jepsenâ€™s â€œCall Me Maybeâ€ and Justin Timberlakeâ€™s â€œSuit and Tie,â€ DeFrances has been singing since the tender age of 13. The Pennsylvania-born singer grew up just outside of Philadelphia. After spending some time singing along the East Coast and having contact with the same production staff that worked on Sinatraâ€™s final three albums, DeFrances was encouraged to contact Patrick Williams.

“I didnâ€™t expect to hear from him,” DeFrances told Canyon News, but was surprised when Williams replied and was willing to collaborate on something that would be ‘fun, but marketable.’

With the promise of recording an album, DeFrances took the leap and set off for California in 2010 and began working on him album â€œPop Swingsâ€ in the spring 2013. “The album is a combination of popular songs from 2013 to 2014 re-imagined in a Sinatra Stye,” DeFrances informed Canyon News. “We use the best stuff and spare no expense, [the] hope is to eventually tour internationally.” Williams and DeFrances hope to draw in the older crowd with the familiar â€˜big bandâ€™ sound, while using the modern songs to pique the interest of the younger generation.

DeFrances told Canyon News he did have an interest in taking modern day music and transforming it into a big band sound, saying,”Itâ€™s fun to re-do, but itâ€™s not a niche.” And though it wouldnâ€™t upset him to be known as the ‘Guy-Who-Does-Covers,’ he wouldnâ€™t want to have the humor aspect that musician/comedian Mark Johnathon Davis has, who is known best by his stage name, Richard Cheese.

Since coming to California, DeFrances has been hard at work recording his album, but he did give a glimpse into his immediate and future plans. He is currently working on a web-series project with his close friend, Chuck Granata, who he has known since the beginning of his performing days in 2002. The web-series will be a 20-minute show, most likely placed on YouTube to discuss â€˜the great American songbook,â€™ mostly looking at music from the 1920s to the 1960s. To conclude each webisode, DeFrances plans to perform a piece pertinent to the segment with a band consisting of 5-6 people.

As for recording plans, DeFrances has three prospective albums in the making, the first being a 4th of July album with a symphony orchestra, the second album will be a Christmas album and the final album being a Frank Sinatra tribute album to commemorate his 100th birthday next year which will be ‘first rate.’

DeFrances informed Canyon News that his performance at the Vibrato Jazz Club will become a regular installment, performing at 8:00 p.m. once or twice a month as long as he is in California. The Vibrato Jazz Club is located on 2930 Beverly Glen Circle, Los Angeles, CA 90077. To make reservations for the event call: 310-474-9400.