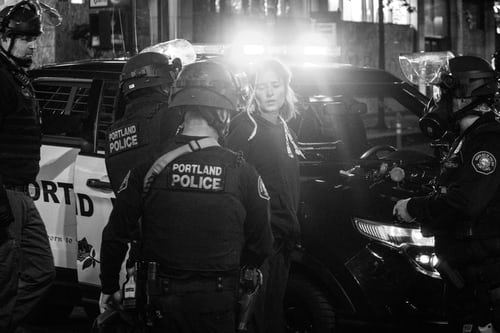 STUDIO CITY—Television producer Jill Blackstone was arrested on Wednesday, April 11, in Baltimore for her role in the murder of her deaf and partially blind sister Wendy Blackstone in March 2015. The Los Angeles Police Department’s Operations-Valley Bureau Homicide Detectives worked in collaboration with Baltimore Police Department.

On March 14, 2015, Jill drugged her sister Wendy and placed her in the garage of their residence on Landale Street along with three pet dogs. Jill Blackstone set the garage on fire, killing Wendy and two of the dogs; staging the fire as an accident the LAPD noted.

Homicide detectives suspect the motive was Jill’s dissatisfaction of being forced to provide long-term care for her sister and financial hardship.

In March 2018, the Los Angeles District Attorney’s Office filed murder and animal cruelty charges and issued a warrant for Jill Blackstone. Homicide detectives were notified by Jill Blackstone’s attorney, that she checked herself into a hospital in Baltimore, Maryland due to a medical condition. Jill Blackstone is currently in custody with Baltimore Police Department awaiting extradition back to Los Angeles.

TMZ reported that Wendy died as a result of carbon monoxide poisoning and Xanax was found in her body. According to reports, a suicide note was also found at the scene, which authorities later determined was written by Jill.

Tipsters may also visit www.lapdonline.org, and click on “Anonymous Web Tips” under the “Get Involved-Crime Stoppers” menu to submit an online tip. Lastly, tipsters may also download the “P3 Tips” mobile application and select the L.A. Regional Crime Stoppers as their local program.